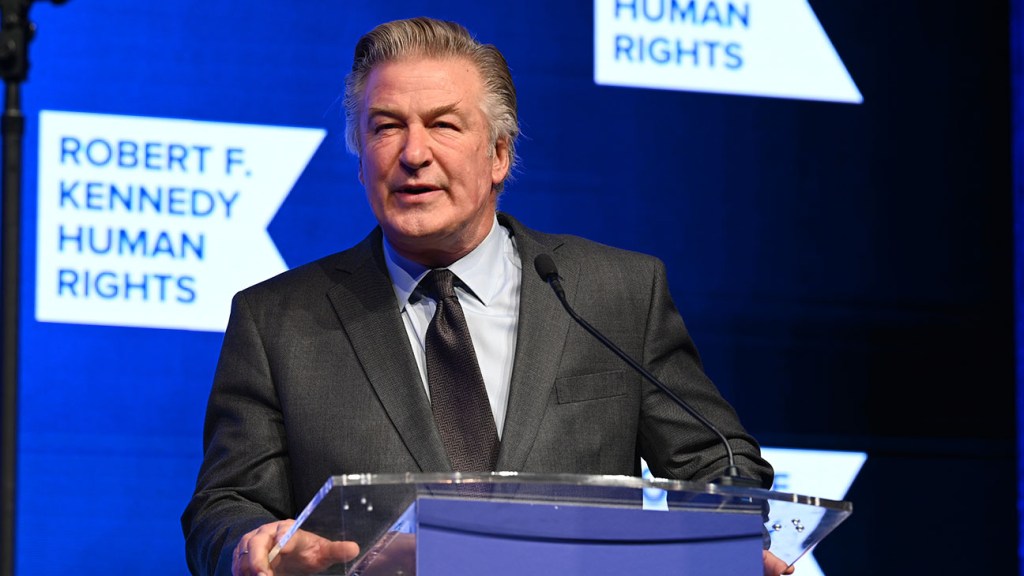 Alec Baldwin delivered jokes and praises for the activism and advocacy of the night’s honorees while serving as the master of ceremonies for the Robert F. Kennedy Human Rights 2021 Ripple of Hope Gala on Thursday night. Held at the New York Hilton Midtown Manhattan Hotel, the event marked Baldwin’s first public appearance since the Rust shooting.

Vice President Kamala Harris served as the gala’s keynote speaker, with numerous members of the Kennedy family in attendance along with in-person and virtual supporters of the human rights organization, including Martin Sheen and Richard Kind.

Baldwin began the evening by welcoming the crowd with a joke. “I have six kids. Anything to get out of the house for 30 minutes,” he said before speaking briefly about the life and legacy of Robert F. Kennedy, who the actor declared “urges us to make gentle the light of the world.”

“We will celebrate these extraordinary honorees and recommit ourselves to what Bobby said when he announced his presidential bid, ‘Peace, justice and compassion.’”

When RFK Human Rights president Kerry Kennedy took the stage shortly after to discuss the work of the organization and legacy of RFK, she started by lauding Baldwin, telling the crowd of more than 700 vaccinated and tested in-person attendees, “In your good times and bad and his good times and bad, he always shows up.”

Kennedy recalled initially meeting Baldwin in the ’80s at a cocktail party, before reaching out to him to see if he would attend a charity golf tournament. She went on to detail many more times “he said yes” when she reached out to Baldwin for assistance with RFK’s work — from fundraising events to demonstrations. “I think you must have missed the terrible twos because you just don’t know how to say no,” she joked before introducing the night’s virtual video presentation, featuring the night’s honorees.

Each year the laureates are selected for their exemplary leadership across the international business, entertainment and activist communities and their commitment to social change, both of which reflect Robert Kennedy’s passion for equality, justice and basic human rights.

Both Harris and Gorman appeared virtually for this year’s gala, along with CBS This Morning co-host Gayle King, actors Giancarlo Esposito, Alfre Woodard and Chris Tucker, as well as comedian-actors Keegan-Michael Key and George Lopez, who were among the night’s virtual presenters and speakers.

The vice president used much of her keynote to address Kennedy’s work advancing civil and voting rights while discussing current legislative efforts across the country to suppress the vote — an issue that both The Freedom to Vote Act and the John Lewis Voting Rights Advancement Act aim to address.

“The President and I, in the tradition of great leaders like Robert Kennedy, are determined to get these bills passed,” Harris said. “We must always remember, America is not defined by perfection. America is defined by our commitment to perfecting.”

The 23-year-old poet Gorman, who spoke during President Joe Biden’s inauguration, shared a piece written for the event when accepting her honor. “Dare to care, to fight for more. To not be just a ripple, but a roar,” she said, before congratulating the other honorees.

Abrams, who announced her second campaign for governor of Georgia on Dec. 1, spoke to Kennedy’s life and death, which she said was “in pursuit of justice.”

“As a product of Mississippi and Georgia, I have lived and learned the experiences that have animated Robert Kennedy’s most noble works, and I share his fundamental belief that law and public policy must be tools for the common good ways to build rather than diminish those who share this world with us,” she said in a speech that largely highlighted her now national work defending voter rights.

“Our nation and our world once again, faces multiple crises — a global pandemic, a rapidly changing climate that threatens lives and livelihoods, and a battle for equal access and equal freedom, regardless of person or place. But to address these challenges, and gird ourselves for more, we are obliged to protect the freedom to vote,” Abrams said in her virtual speech.

Following the virtual portion of the event and a live auction, which saw Baldwin joking from the stage with one of the attendees about a bid, Abrams joined Feliciano and Parekh on stage, with Vestberg appearing virtually, for a fireside chat. It began though not with a question, but with the room — led by moderator Doug Brinkley — singing “Happy Birthday” to voting rights activist.

The more than 30-minute conversation focused on the general focuses of each laureates’ work, spanning voting rights and education equity to economic justice and digital inclusion. About halfway through the casual chat, Brinkley acknowledged Abrams’ bid for Georgia governor, which would make her the first Black woman to govern any state.

The candidate noted that there have been “attacks on voting in every state but one” through various introduced bills this year alone, with Abrams making clear as she did during her first campaign, that she is choosing to run and to democratic right to vote “not only for those who agree with me, but those who would never vote for me in my life.”

“You don’t protect democracy for a party. You protect it for people,” she said. “Our democracy demands that if you want it to survive.”

The Robert F. Kennedy 2021 Ripple of Hope Gala event marked Baldwin’s first public appearance since the Rust shooting, resulting in the death of cinematographer Halyna Hutchins on Oct. 21 when Baldwin, a star on the Western and one of its producers, discharged a gun that contained a live round while filming on the movie’s Bonanza City, New Mexico, set. Rust director Joel Souza was also wounded during the tragedy.

Earlier in the day, Baldwin reshared a letter supported by 25 Rust crew members disputing previous crew reports of a “chaotic, dangerous” set after deleting one of two of his verified public Twitter accounts. Just over a week earlier, he sat for his first TV interview with George Stephanopoulos on Dec. 2, which saw him emotionally discuss the shooting at length for the first time.