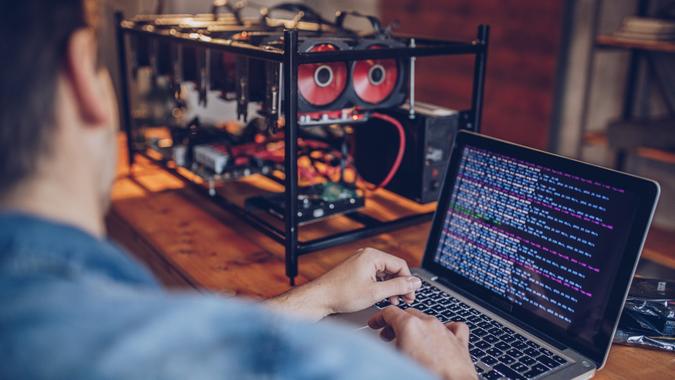 Bitcoin mining is a computational process that achieves two distinct and important goals. First, it allows miners to “find” new bitcoins that are added to circulation. Second, Bitcoin miners verify transactions while mining. This helps ensure the integrity of the blockchain and helps prevent double-spending.

Bitcoin mining works by having a computer attempt to produce a string of characters that is less than or equal to a target hash. The target hash is a 64-digit alphanumeric code, and miners are rewarded if they are the first to come up with a solution.

If you are a Bitcoin bull, you might wonder if it’s time to start mining it. This article will take a look at how Bitcoin mining works and whether it is something you should consider.

The Evolution of Bitcoin Mining

In the early days of Bitcoin mining, an everyday desktop computer or laptop was powerful enough to uncover new blocks. The computer’s central processing unit, or CPU, was sufficient to discover new blocks. Later, it was discovered that graphics processing units, or GPUs, used for gaming were more efficient at solving the hashing problem.

These days, Bitcoin miners use specialized hardware called application-specific integrated circuits, or ASICs, designed just for mining. These devices can cost around $500 up to over $15,000. There are even mining pools run by third parties where groups of machines work to solve the same problem, then split the profit if they manage to mine a new block.

All of this means that a single miner has little chance to successfully mine a block. Even with an ASIC, the advent of mining pools makes it difficult for one miner working on their own to find a new block. Without specialized hardware, their chances are even lower. Thus, without the most up-to-date ASIC, one cannot hope to recoup the money they spend on their mining rig. Realistically, joining a mining pool with one of these machines gives you the best chance of success these days.

When a Bitcoin miner successfully finds a valid hash, a block is added to the blockchain, verifying the most recent batch of transactions. This helps verify the integrity of the blockchain, and miners are rewarded in Bitcoin for their efforts. It also helps prevent double-spending.

Double-spending is the phenomenon wherein someone could spend the same bitcoin twice. Because Bitcoin is a digital currency and not a physical one, you don’t physically hand it over to someone like you would to a cashier at a grocery store. Thus, the blockchain helps prevent people from spending the same bitcoin more than once.

Bitcoin aims to add new blocks to the blockchain every 10 minutes; this is how long it theoretically takes to mine one bitcoin. It does this to maintain a steady rate of new blocks.

However, the more computer power there is at work to find new blocks, the faster new blocks can be found. Because new miners and more computing power are being added to the network all the time, the difficulty of verifying these transactions must increase to maintain a stable flow of blocks.

That means that as more collective computer power is added to the network, the more difficult it becomes for a single, underpowered machine to mine a new block. The difficulty is adjusted over time as computing power changes.

In the very early days of Bitcoin mining, the network difficulty of mining gave you a better than 1 in 5 chance of finding a new block. Hence, any machine was good enough for Bitcoin mining. Today, the odds of solving for a hash below the target is 1 in 22 trillion; it has been as high as 1 in 25 trillion.

Bitcoin mining is an arduous process, especially these days. In order to incentivize that work, miners are rewarded in Bitcoin each time they mine a block. This helps the system be self-sustaining.

The number of total Bitcoin available is capped at 21 million. To date, the total number of Bitcoin mined is nearly 19 million. However, because of the halving of rewards, it will take until about the year 2140 to mine all bitcoins. But miners will still be needed to verify transactions; thus, after 2140, miners will be rewarded with fees paid by those using the network.

Should You Start Mining Bitcoin?

With some companies now accepting Bitcoin, you might wonder if you should start mining yourself. Bitcoin mining has changed dramatically in only about 10 years. When Bitcoin mining was new, anyone could do it using whatever hardware they happened to have. But mining difficulty has increased so much that it is no longer viable to mine using your CPU. Even mining with a GPU would likely be wasting electricity unless you join a mining pool. However, some mining pools advise people not to mine with a GPU; an ASIC is recommended.

All of this means that these days, you will be spending more on a specialized machine made for mining. And yet, your best odds will come from joining a mining pool, meaning you only get a piece of the reward if the pool successfully mines a block. The price of Bitcoin has increased, which does help offset the fractional reward, but mining pools distribute rewards based on how much work you do, too.

Thus, you’ll need an ASIC to take full advantage of the competitive edge a mining pool provides. If you can’t afford the hundreds or even thousands you’ll have to spend on that hardware, Bitcoin mining may not be right for you. And don’t forget about the high amounts of electricity needed to run Bitcoin mining equipment; that also has a cost.

Bitcoin mining is an important part of protecting the integrity of the blockchain ledger, but the costs to participate have increased significantly over the years. Gone are the days when you could use any computer you had lying around; now, specialized hardware is almost a must. If you want to reap the rewards of Bitcoin without the upfront cost of mining hardware, you could consider investing in Bitcoin or putting money in an interest-bearing crypto account instead.

Our in-house research team and on-site financial experts work together to create content that’s accurate, impartial, and up to date. We fact-check every single statistic, quote and fact using trusted primary resources to make sure the information we provide is correct. You can learn more about GOBankingRates’ processes and standards in our editorial policy.

Bob Haegele is a personal finance writer who specializes in topics such as investing, banking, credit cards, and real estate. His work has been featured on The Ladders, The Good Men Project, and Small Biz Daily. He also co-runs Modest Money and is a dog sitter and walker.