The United States Securities & Exchange Commission’s (SEC) lawsuit against Ripple and XRP has moved from something that was supposed to be quick to a battle of attrition. The SEC served Ripple for selling unregistered securities on December 22, 2020, but the payments company has continued to make progress in the east, where it is welcomed.

While there seems to be no end in sight for this lawsuit, some speculate that Stellar, a strikingly similar cryptocurrency project, could be what the SEC  goes after next.

This article takes a look at the differences, similarities and possibilities if the regulators ever turn their sights on stellar Lumens.

Ripple and Stellar: The remittance brothers

Despite the fact that much of its history is shrouded in mystery, Ripple Labs, more commonly known as Ripple, is the company behind XRP. The token is designed as a payments, liquidity sourcing and transaction settlement mechanism that uses the federated Byzantine agreement consensus protocol released in 2012.

Ripple is currently the company that looks after the XRP Ledger and its developments.

Stellar, on the other hand, takes a slightly different approach. It is an open-source, distributed payment network that uses the Stellar Consensus Protocol.

Like XRP, XLM is the native asset of the Stellar blockchain that runs on the federated Byzantine agreement system that was launched in 2015. Unlike Ripple, Stellar Development Foundation (SDF) looks after the development of XLM.

Chris Larsen and Jed McCaleb co-founded Ripple, but McCaleb left to start Stellar due to disagreements in the team. Moreover, both tokens are looking to solve a similar cross-border payments problem and are positioned with the right partners to do the same.

While institutions are actively seeking investment opportunities in the cryptocurrency space, they are cautious due to the fuzzy nature of regulators’ stance on digital assets. Bitcoin and Ethereum, for example, are the institutional investors’ favorite, because they are deemed commodities. However, XRP, XLM and other cryptocurrencies do not have this distinction, keeping these high net-worth individuals from taking a stake in altcoins.

Let us take a look at some of the key differences between XRP and XLM.

While these differences are stark, what puts Ripple and XRP in trouble and kept Stellar and XLM safe boils down to two things:

The entity responsible for XLM is labeled “non-profit” while Ripple is not. This subtle demarcation is what puts XRP in the regulators’ crosshairs.

While XRP received a BitLicense in 2016, it allowed Ripple to sell XRP for institutional investors or use it for their products like xRapid.

Despite the lawsuit and the ramifications, Ripple seems to be gaining ground. However, nothing is for certain until the case is finalized. The same holds for Stellar and XLM, which is currently away from regulators’ prying eyes.

Regardless of the hurdles or developments from both sides, the technical aspects of XRP and XLM look bullish.

XRP price is forming a rounding bottom on a weekly chart that extends to its all-time high of $3.317 in 2018. To complete this technical formation, Ripple needs to rally at least 152%. This move will put XRP price at $2.750. Beyond this point, the remittance token is likely to make a run at the all-time high and run past it to set up a new one. 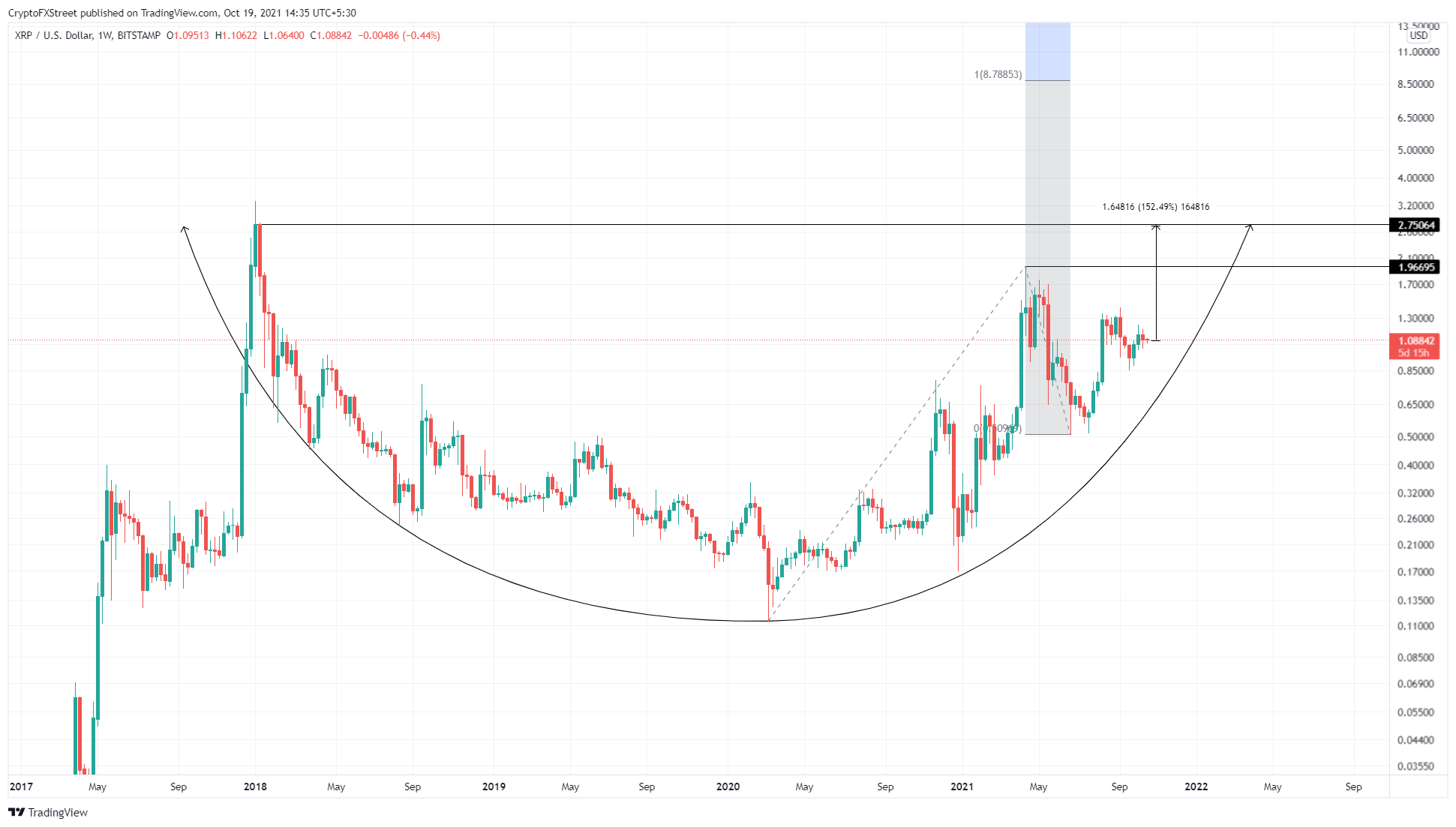 While things are looking up for XRP price, a breakdown of the uptrend by producing a lower low below the recent swing low at $0.858 will invalidate the optimistic scenario for Ripple.

XLM price also shows a bullish outlook as it forms a cup-and-handle on the weekly chart. This setup contains a rounding bottom known as the cup, often followed by a minor downswing called the handle, hence the namesake cup-and-handle.

This pattern forecasts a 1,830% upswing, obtained by measuring the distance between the right peak and bottom of the cup and adding it to a breakout point. 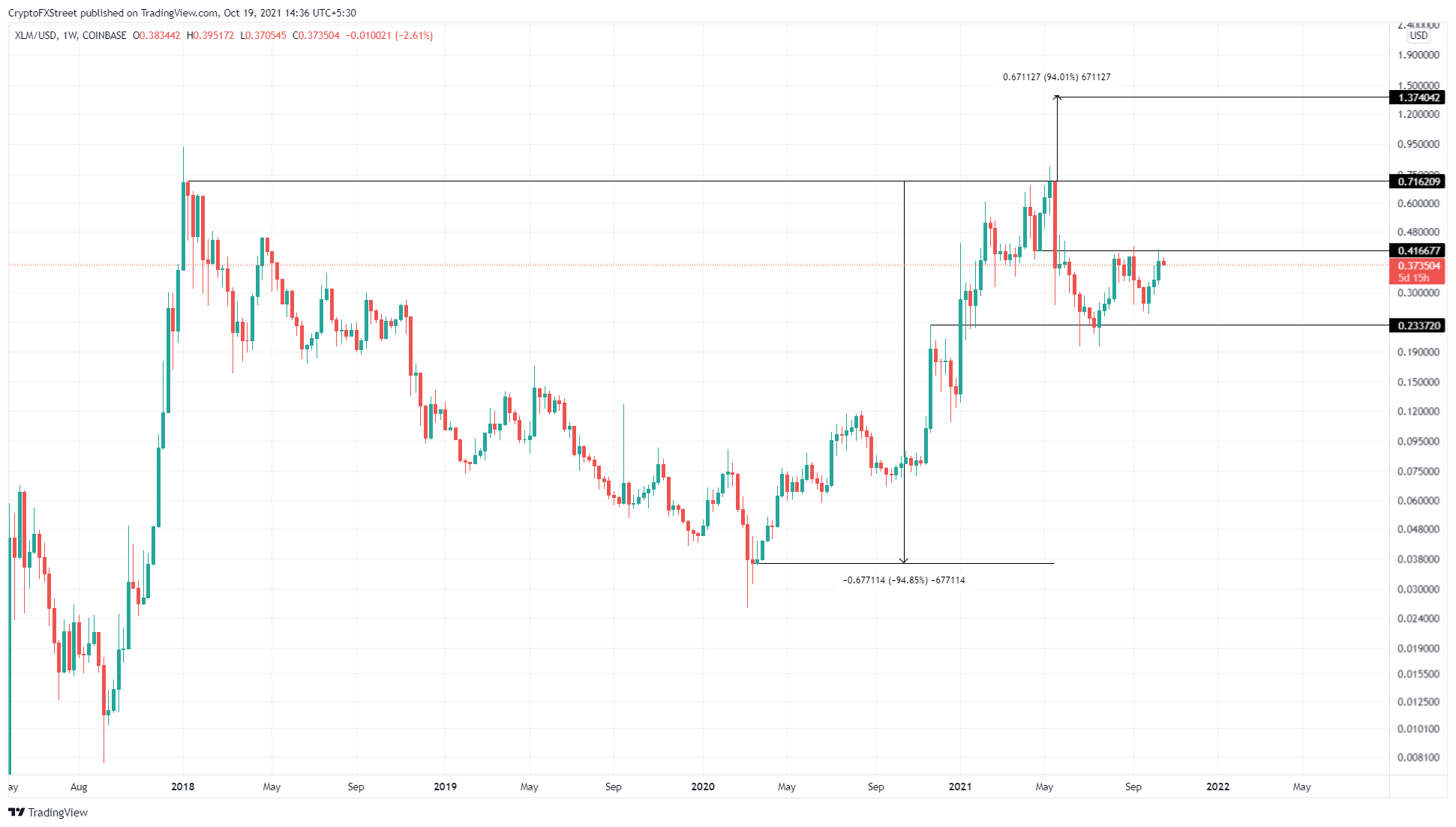 Regardless of the optimism, if XLM price produces a lower low below $0.234, it will invalidate the bullish thesis and potentially trigger a further descent.