Interlay announced the integration of BAND with PolkaBTC earlier today. Now, the trustless Bitcoin bridge is not only secure but ready to receive decentralized Bitcoin price and fee feeds.

“PolkaBTC will utilize Band Protocol decentralized oracles to maintain a secure collateralization ratio on the bridge.”

The project defines PolkaBTC as a “ trustless representation of Bitcoin on Polkadot.” Indeed, this allows users to mint 1:1 Bitcoin-backed assets onto the blockchain, thus opening up a world of new possibilities.

While ERC20 played a critical role in helping grow the DeFi ecosystem on Ethereum, perhaps, PolkaBTC might do the same for Bitcoin. Although institutions are interested in cryptocurrencies, they aren’t fans of self-custody.

Hence, developing Bitcoin-backed assets could be a pivotal step in creating financial products that are only available in the traditional world.

Nonetheless, with Bitcoin market capitalization close to hitting $1 trillion, this is a bullish development for both BTC and Polkadot.

DOT price trading inside an ascending parallel channel forming a series of higher highs and higher lows. With the recent integration and announcement surrounding the projects built on the Polkadot ecosystem, the price seems primed for another leg up.

Rightfully so, Polkadot price has already sliced through the previous all-time high at $32.70 and minted a new ATH of $33. However, only a 4-hour close above the previous ATH would lead to higher highs.

If this were to occur, it would trigger FOMO among retail investors who would rush to exchanges to buy more DOT, pushing the price higher.

The bullish momentum could then take Polkadot price to the next supply barrier at $37.56 or the 127.2% Fibonacci retracement level. This uptick would constitute nearly a 20% surge from the current price level. 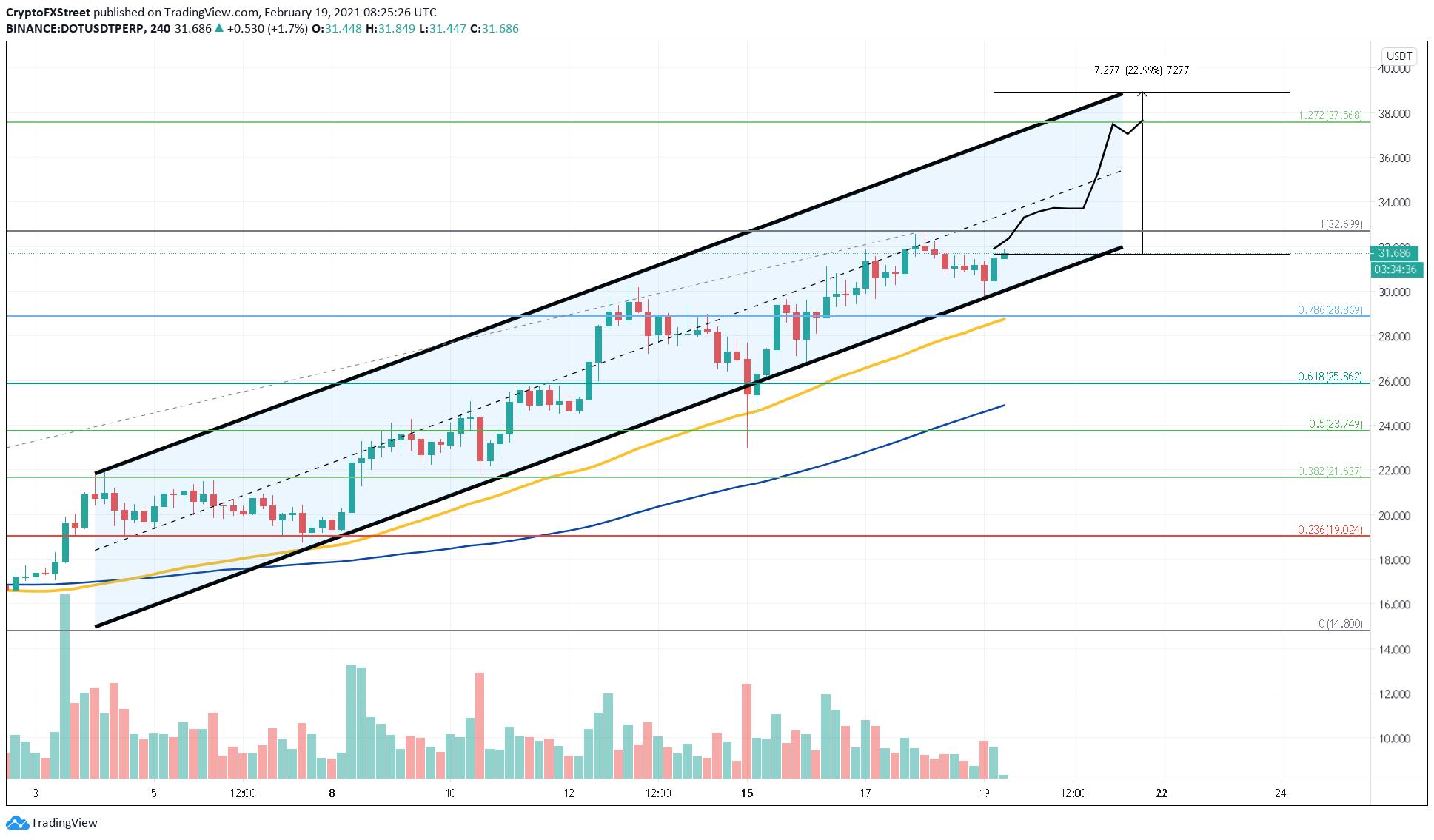 Supporting this bullish momentum is the interest shown by institutional investors in Polkadot. Goldman Sachs, JP Morgan, and others have all taken an active position in DOT per se.

At the time of writing, each ETP or share of ADOT contains 1.1025 DOT.

This development reveals two things, institutions’ increased appetite for cryptocurrencies and their interest in DOT, strengthening the bullish case.

Regardless, investors need to be wary of increased volatility when prices recapture their ATH.

A 4-hour candlestick close below $28.90 would invalidate DOT’s bullish outlook. Not only will this close signal the end of the parallel channel, but it will also indicate a breakdown of the support provided by the 50 four-hour moving average.

Such a price action would send Polkadot into a tailspin to $25.86 or the 61.8% Fibonacci retracement level.