But so far, the new ProShares fund’s returns are falling short of the performance of bitcoin in cryptocurrency markets – the very thing the ETF was supposed to track. BITO is also underperforming the Grayscale Bitcoin Trust, or GBTC, which at $35.23 billion is the world’s largest bitcoin fund. (Grayscale is a unit of Digital Currency Group, which also owns CoinDesk.)

From Oct. 19, when the ProShares ETF started trading, through Tuesday, BITO shares were down by 2.45%, based on a chart shared by Grayscale, the company that sponsors GBTC. Bitcoin was down 1% over the same period, and GBTC was up 7.5%. 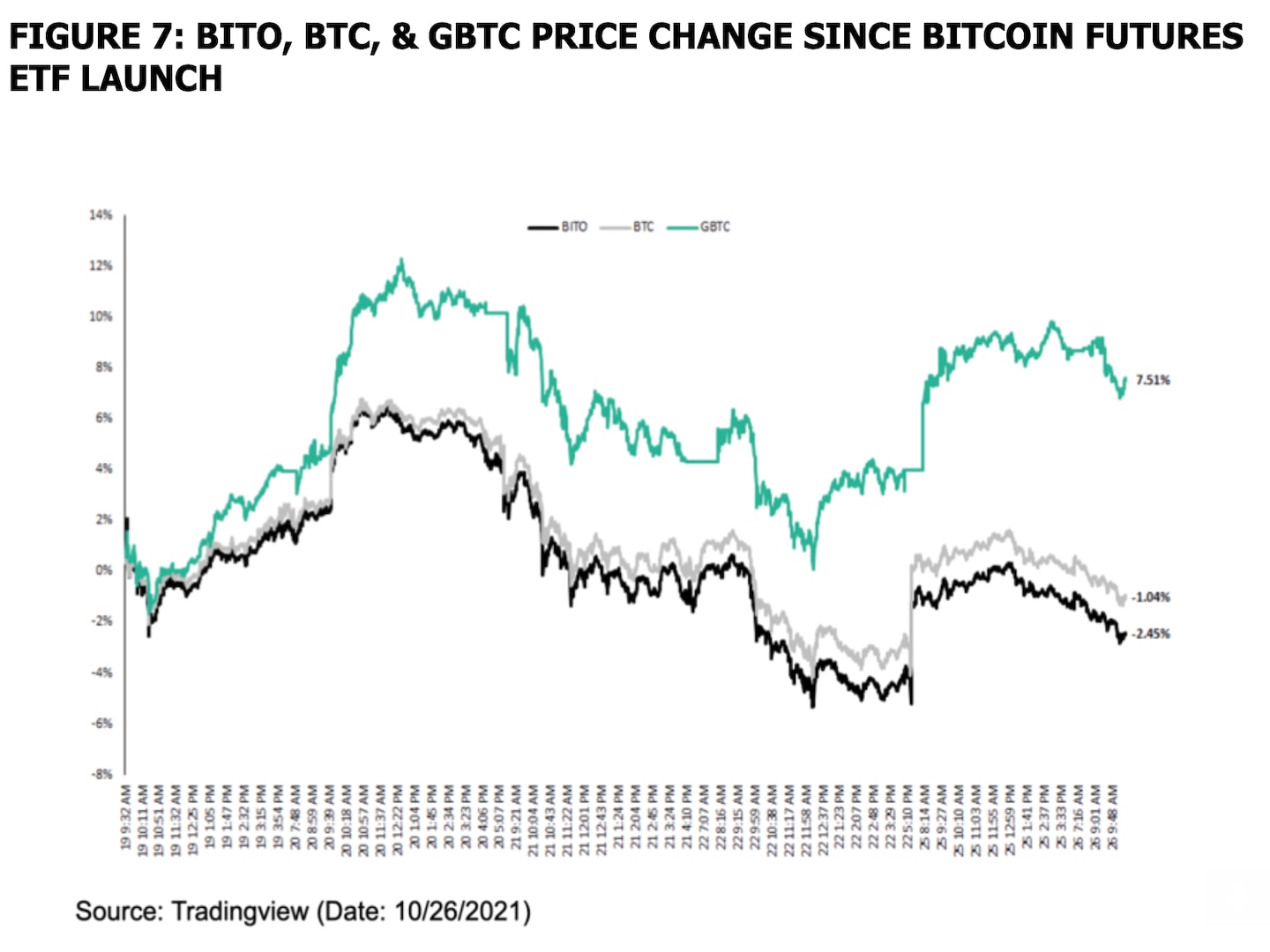 The discrepancy has rekindled criticism of the U.S. Securities and Exchange Commission’s (SEC) decision to allow an ETF focused on bitcoin futures – as is the case for ProShares – but not an ETF that would be backed directly by bitcoin, known as a “spot ETF.”

Grayscale is pushing hard to convert GBTC into a spot bitcoin ETF, citing some of the disadvantages of a futures-based ETF. Those include the risk of “roll costs” or “contango bleed” – a source of underperformance that stems from the unique structure of futures markets.

BITO’s launch has helped to drive up the price of bitcoin futures on the Chicago-based CME exchange, which in turn “has also been driving spot prices higher,” Grayscale noted in Tuesday in a newsletter.

“The product has seen strong inflows since launch, demonstrating investor appetite for accessing the crypto markets,” Grayscale wrote. “But it may also come at the expense of U.S. bitcoin futures ETF investors.”

Market signals reveal the tension in the battle among the ETF aspirants.

GBTC’s price is currently trading at a steep 17% discount to the market price of its underlying bitcoin.

Bloomberg commodities analyst Mike McGlone wrote last week that the GBTC discount might evaporate if the trust was allowed to convert to an ETF.

“Grayscale has said it’s committed to converting GBTC to an ETF,” wrote McGlone in a market update shared with CoinDesk. ”We see that as a matter of time, notably with a new digital divide opening [against] China, which may make bitcoin and crypto success a vested interest of the U.S.”

Eric Balchunas, a senior ETF analyst at Bloomberg tweeted that GBTC beating BITO is a nice run, but not reliable since the bitcoin trust’s “premium/discount” is a “big unknown variable.”

Chances of a spot bitcoin ETF

Analysts for Arcane Research wrote this week that the discount reflects the dim chances of the spot ETF getting approved anytime soon.

“Shares in the GBTC have never traded at a higher discount, indicating that the market is not expecting the SEC to accept a spot-based ETF,” Arcane Research wrote in a weekly report.

Grayscale, however, says it’s confident that a spot ETF will eventually see daylight.

“It’s not a question of if but when a bitcoin spot ETF will gain approval from the SEC,” according to the firm.

“We believe that the SEC’s decision to permit a futures-based ETF takes the market a step closer to a bitcoin spot ETF,” Grayscale wrote. “We believe this continued institutionalization and increased market access to crypto will further increase investor excitement and portfolio adoption.”