Investor interest in the bitcoin options market increased, with the cryptocurrency nearing record highs in the lead up to Tuesday’s launch of the first-ever U.S.-based bitcoin futures exchange-traded fund (ETF).

Bybt data shows that the cumulative dollar value of bitcoin options contracts open on major exchanges rose to $14 billion on Tuesday, hitting the highest since April. The tally was a whisker away from the peak of $14.68 billion reached on March 24.

Open interest or the number of contracts traded but not squared off with an offsetting position rose to a six-month high of 229,220 BTC.

Bitcoin reached a record UTC close above $64,000 on Tuesday as the ProShares’ ETF made an impressive debut on the New York Stock Exchange, registering a trading volume of $1 billion.

Hopes that the U.S. would approve a futures-based ETF strengthened late last month after the Securities Exchange and Commission (SEC) Chairman Gary Gensler reiterated support for the structured product. Since then, bitcoin has rallied over 40%, and options open interest has increased by 50%.

The pick-up in options activity in the days leading up to the binary event – the SEC’s decision on ETF proposal – signifies increased participation by sophisticated investors and market maturity.

“An extremely rare occurrence for Bitcoin is the Event-driven trade, observed as Futures ETF deadlines approached and then approved. Options are a perfect tool to employ in these scenarios,” Deribit Insights tweeted. Deribit is the world’s largest crypto options exchange accounting for more than 80% of open interest and trading volume in bitcoin and ether options markets. 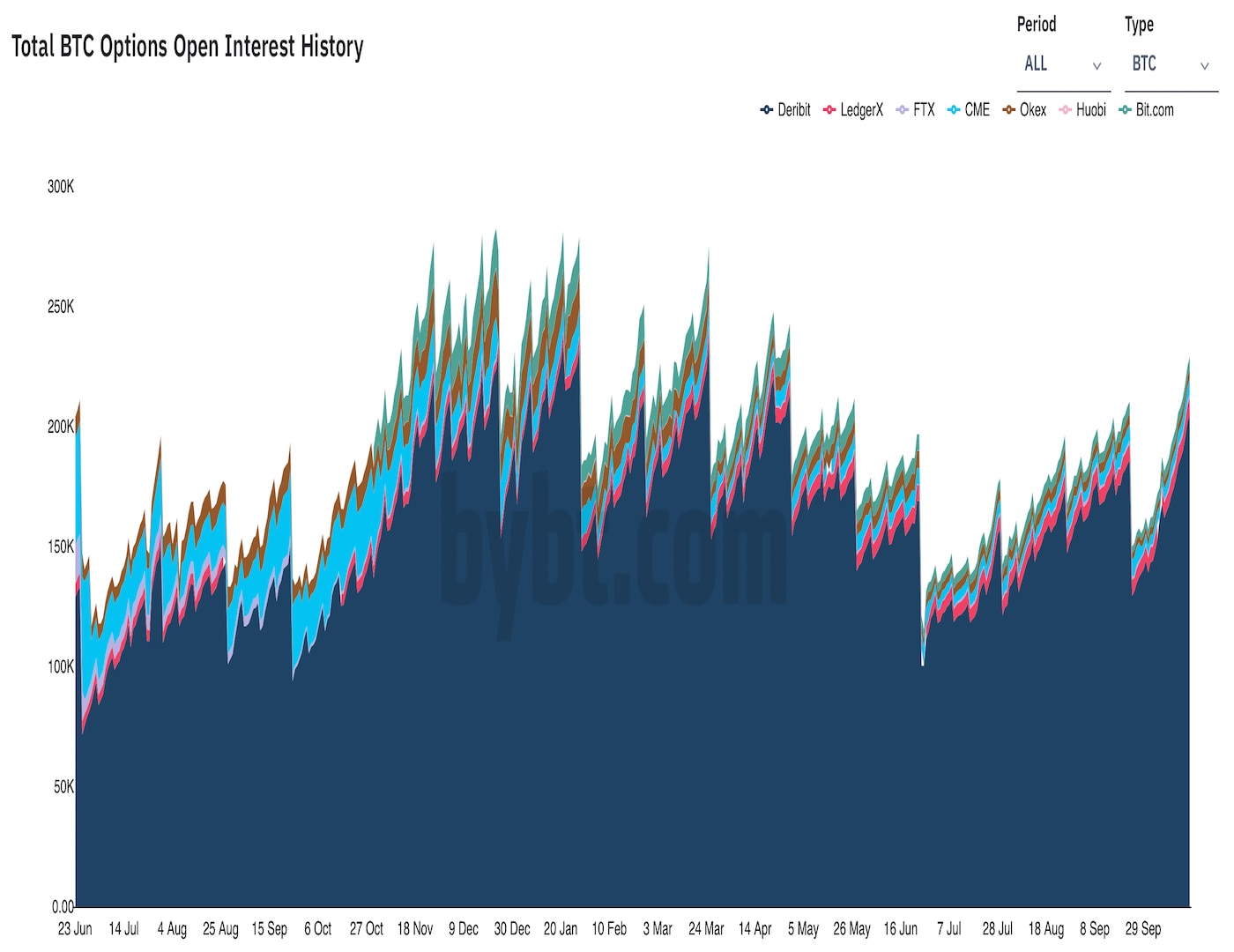 Seasoned traders often use both calls and options when the outcome of a binary event is uncertain, but a big move in either direction is expected. However, flows have been predominantly bullish ahead of ProShares’ ETF listing, with traders piling into out-of-the-money or higher strike call options, as blockchain data analytics firm Glassnode mentioned in its weekly report published Monday.

“The favoured options contracts appear to be call options with strike prices above $100,000, with a typical open interest of $250 million to $350 million for call options expiring at the end of the year. The open interest in call options dwarfs that in put options, aligning with the overall bullish market sentiment,” Glassnode said.

The ProShares Bitcoin Strategy Fund saw a trading volume of $1 billion on Tuesday, becoming the second-most heavily traded new ETF on record, according to Bloomberg data.

“Volumes were pretty much right on the screws where the “ETF Nerds” had been predicting — about $1 billion,” David Nadig, chief investment officer and director of research of ETF Trends, said in a Twitter response. “The nature of that volume seems to be [coming from] the small lot, implying retail investors, speculators and high-frequency traders rather than large institutional allocations.”

The launch of futures-based ETFs could have a positive impact on the derivatives market. “CME options are currently a very small part of the whole crypto options market. Perhaps we could see some growth and development in CME options as a result,” QCP Capital said in its Telegram channel last week.

On Tuesday, the CME accounted for 2.7% of the global bitcoin options open interest of 229,220 BTC.