Thanks to a BIOS update for EVGA’s version of the Nvidia RTX 3080ti LHR graphics card, Ethereum miners can now enjoy 21% more hashrate.

As per a report from OwnSnap, ETH miners can now unlock more hashrate on their RTX 3080ti LHR-version cards using a BIOS update.

LHR or “Lite Hash Rate” is an updated line of Nvidia’s RTX GPUs that comes with a prebuilt limiter on the card’s total mining hashrate.

With these cards, Ethereum miners were only able to take advantage of around 50% of the GPU performance when mining.

However, a while back, an update of the popular mining program NBminer unlocked some of the hashrate and miners could now use about 70% of the total GPU power.

Then, a couple of months back, some miners were able to unlock 100% of the hashrate on these RTX LHR cards. But there was a catch here, and it was that the extra power could only be used for mining a coin other than Ethereum. For example, 70% hashrate went to ETH, while the rest 30% went to the other coin.

A few days back, Nvidia’s card partner EVGA released a firmware update for the RTX 3080ti LHR that fixed an issue causing a limit on the GPU’s power during high workloads.

Related Reading | Only In Crypto: A Croissant Says Ethereum Will Be One Of World’s Most Productive Assets

With the update, ETH miners can now enjoy around 80 MH/s, a hashrate boost of 21% over the previous 66 MH/s.

There hasn’t been any such firmware update for cards by brands other than EVGA as of yet. However, owners of RTX 3080ti from other Nvidia partners can still download this update and custom flash their BIOS with it.

But beware that flashing the BIOS from another GPU model can be quite dangerous and may even brick your card.

Nonetheless, some users have found that non-EVGA cards can show even better results with this update. Red Panda Mining was able to squeeze out around 91 MH/s with his Inno-3D RTX 3080ti.

At the time of writing, Ethereum’s price floats around $3.9k, down 2% in the last seven days. Over the past month, the crypto has accumulated 3% in losses.

Here is a chart that shows the trend in the price of the coin over the last five days: 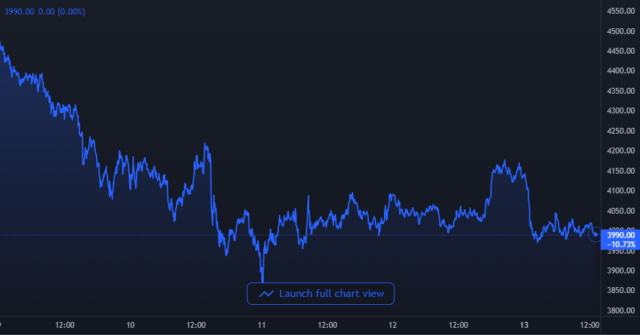 Ethereum broke past $4.1k yesterday, but today the crypto has again come down and erased some of the recovery it achieved.