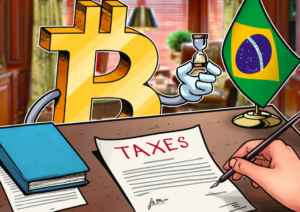 Crypto skeptics have been pointing out the unregulated nature of digital assets for a long time. Gilson Finkelsztain, the president of Brazil’s B3 stock exchange, has previously expressed similar worries.

The South American country’s crypto regulatory difficulties appear to be coming to an end. According to recent reports, Brazil is working on a crypto law. The bill was sent to the Committee on Economic Affairs last week (CAE).

The measure aims to provide cryptocurrency a new status in addition to providing an incentive for renewable BTC mining. The Brazilian government will recognize crypto cryptocurrencies as currencies, according to the new bill. Why would a country do anything like this? Cryptocurrencies will be regulated by the country’s Central Bank once they are recognized as a currency.

The proposed proposal’s main goal is to combat money laundering, which has long been a worry in the crypto trading business. Furthermore, the law aims to make the entire trading process clear to both the regulatory agency and the customer.

As previously stated, Brazil’s crypto bill aims to make the central bank the country’s crypto regulator. Furthermore, the bill recommends that the Brazilian Securities Commission be involved in regulatory matters. Positioning digital assets as securities are one of the regulatory challenges that the commission will address.

Because the central bank serves as the country’s crypto regulator, crypto coins will be regarded as currencies in Brazil. As a result, Brazilian cryptocurrency exchanges will provide a diverse range of financial services, including loans. Brazil, like many other governments throughout the world, regards digital assets as a commodity similar to coffee or iron ore.

In addition to the above-mentioned bill, another crypto bill is seeking approval. This measure was sponsored by Luizo Goulart, a Brazilian lawmaker, and Federal Deputy. The measure aims to make cryptocurrency legal as a form of payment for both private and public sector employees.

The law also includes a proposal to allow employees to request payment in cryptocurrency. The bill, on the other hand, stipulates that businesses will only make such a payment if the workers and the company have reached an agreement.

If you find this article informative then do share it with your friends and family!