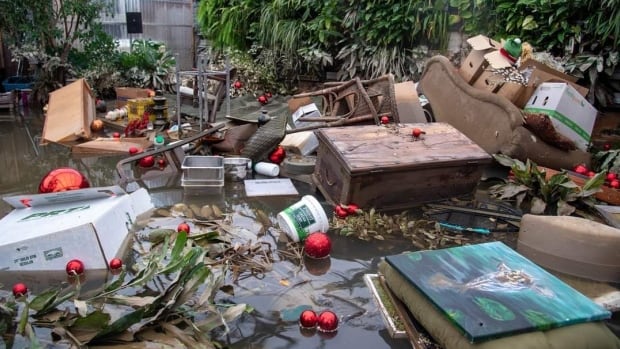 At the height of the floods that ripped through B.C. in late November, Ripples Estate Winery in Abbotsford was under seven feet of water.

A greenhouse full of tropical plants, expensive electronic distilling equipment, and most of their stock of wine, vodka, gin and rum were underwater. Blueberry fields were also drenched for nearly two weeks, including heavy machinery like harvesters, bobcats and tractors.

“We are trying to see what we can save, but it doesn’t look like there’s a lot of alcohol or equipment that will come through on the other end of this,” said head distiller Kelsey Mostertman, who operates the winery with her parents.

Mostertman said the pressure of the water also caused the top of some large barrels containing wine to pop off, leaking wine into the floodwaters, and leading the barrels to float away.

With so much lost, Mostertman was relieved to find that the barrels hadn’t floated too far, and had settled in a nearby ditch. Her family worked to retrieve them and lined them up on the side of the road, with plans to pick them up in the morning.

But by morning, they found that someone had loaded up the barrels and taken them away.

Mostertman said the 20 or so barrels, which are about three and a half feet tall, and worth $200 to $600 depending on how they were made and what they stored, may be hard to retrieve, as they are often recycled from other wineries and may look similar to those used by other farms, distilleries and wedding venues in the area.

She said she hopes they were picked up by a well-meaning bystander helping to grab junk off the road, rather than a thief.

“Personally I like to try and see the best in people and with all the negativity going on I would hate to say that they were stolen,” she said, adding that this highlights the need for people to exercise caution while removing items carried away by the floods.

“There’s a lot of people that are kind of driving through those areas, and I understand that these are a lot of things that you want to see — but with all the pain and grief that me and my neighbours are all going through, it’s really hard when we have the public going through, especially when they are picking up things that potentially belong to people that we haven’t had a chance to pick up ourselves.”

Abbotsford Police said in a statement to CBC News that it is monitoring reports of thievery carefully, and that so far there has only been one instance of a break-in within the Sumas Prairie area.

“I know people sometimes feel that the value of an item might not be worth reporting, but if we don’t know that crime is occurring in an area we can’t take steps to address the areas of concern,” it said in a statement.

Mostertman, who did report the removal of the barrels to police, said that as roads open and barriers are removed, she hopes members of the public will be mindful of not touching items that owners may not have had time to retrieve.

“Personally I would like to ask that if you’re not from the area and you’re coming to see the devastation, I would ask that you stay away unless you are coming to help,” she said.

“With everything we are going through right now, we don’t really need more traffic coming … it’s pretty obvious when people aren’t there to help and they’re going by with their phones out taking pictures of everything.”