Bitcoin needs to chart a 77% rally in the next four weeks to reach the widely forecast year-end value of $100,000. While analysts are bullish on the cryptocurrency, they don’t foresee a rally to six figures in the short term.

“The latest Commitment of Traders report shows net-long positioning on the Chicago Mercantile Exchange, with an increased commitment by asset managers,” said Laurent Kssis, a crypto exchange-traded fund (ETF) expert and director of CEC Capital. The report was released on Friday. “Having said that, it won’t be enough to commit to the $100,000 rally this month as everyone is/was predicting.”

Kssis said the cryptocurrency remains vulnerable to price pullbacks fueled by leverage washouts. “As much as the long-term trend remains positive, short-term pressures and liquidations, due to higher leverage being offered, remain high and will continue to put pressure on BTC price,” Kssis added.

While bitcoin futures open interest (OI) in U.S. dollar terms has recently declined along with the cryptocurrency’s price, the metric remains high when measured in BTC terms, indicating excess leverage in the market. Open interest refers to the number of contracts traded but not liquidated with offsetting positions.

“The bitcoin denominated OI has now remained above 365,000 BTC for more than a month,” Arcane Research’s weekly noted published Tuesday said. “It is not common to see such a high OI being sustained for such a long duration. This could suggest that the market is currently over-saturated with leverage.”

Another signal: Open interest on the Chicago Mercantile Exchange, a proxy for institutional activity, has declined alongside a pickup in activity in the retail-focused Bybit exchange. In the past, increased activity on Bybit has paved the way for price pullbacks. 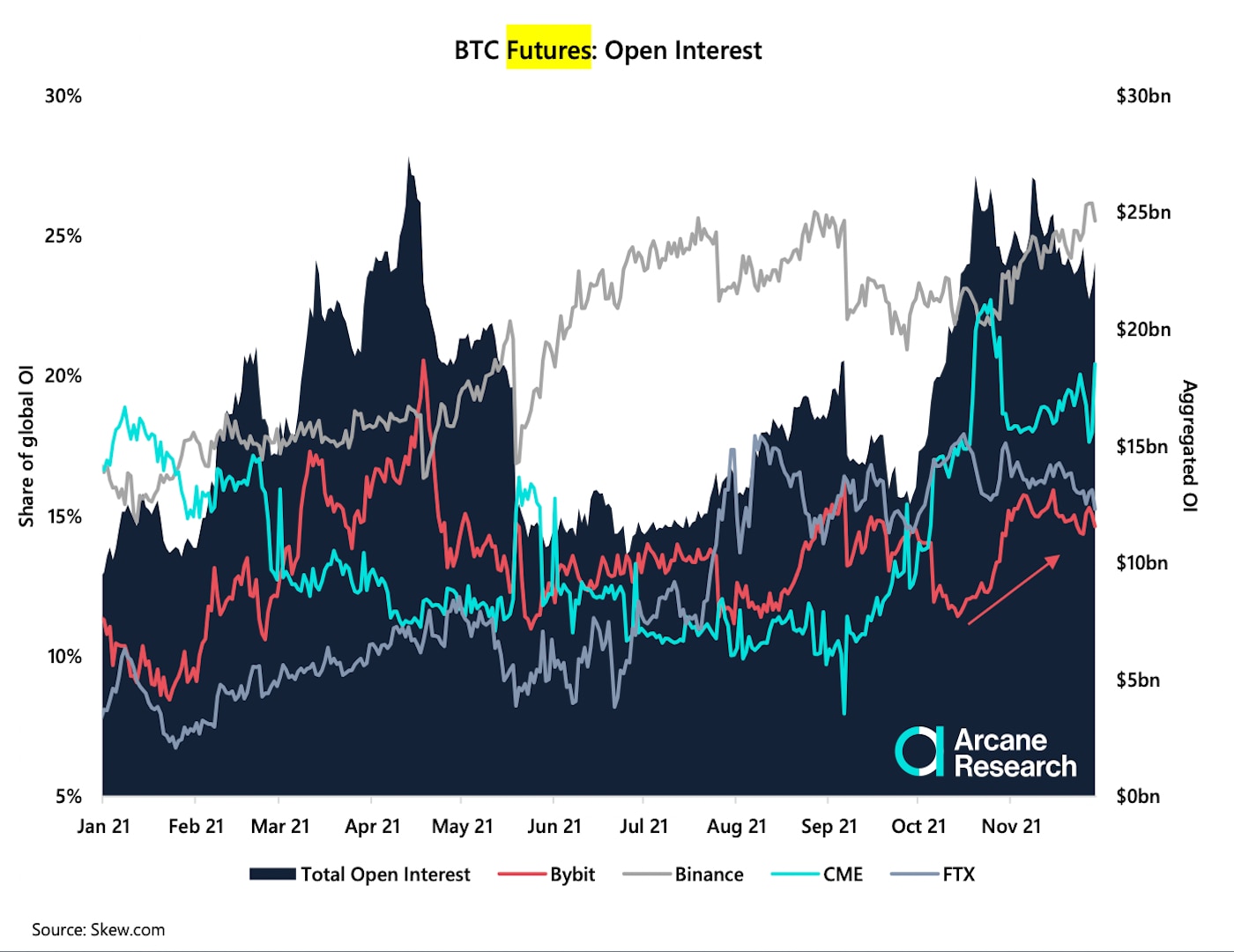 “Bybit’s share of the global open interest in the bitcoin futures has remained at high levels throughout November. Previously, Bybit’s OI has seen huge booms and busts as trades get crowded,” Arcane Research noted.

While a continued decline of liquid supply in the market leaves the door open for an outsize rally on large buy orders, a renewed institutional participation ahead of the new year looks unlikely.

“With the end of year fast approaching, most investors will probably unwind their risk-on position allowing them to present decent yearly performances,” Kssis said. “We do not see a bull run in 2021.”

Over 75% of supply can be considered illiquid at press time, according to Glassnode data. Illiquid supply is defined as the number of coins held in addresses that spend less than 25% of their incoming coins.

Matthew Dibb, chief operating officer and co-founder of Stack Funds, said the chance of bitcoin rallying to $100,000 is getting slimmer by the day as the macroeconomic environment doesn’t appear price supportive, especially with Federal Reserve Chairman Jerome Powell’s recent hawkish turn. The central bank could discuss speeding up the bond-buying taper, or scaling back of asset purchases, at its December meeting, Powell said earlier this week.

“While we are bullish for the short term, there is growing doubt that $100,000 will be hit,” Dibb said. “Renewed interest is, however, being shown in ether and other coins associated with layer 1 blockchains.”

While bitcoin is down 1.4% this week, ether has risen by about 5%. The ether-bitcoin (ETH/BTC) ratio has broken out of its multi-month consolidation, signaling ether leadership ahead or rotation of money out of bitcoin and into ether and other alternative cryptocurrencies in coming weeks. 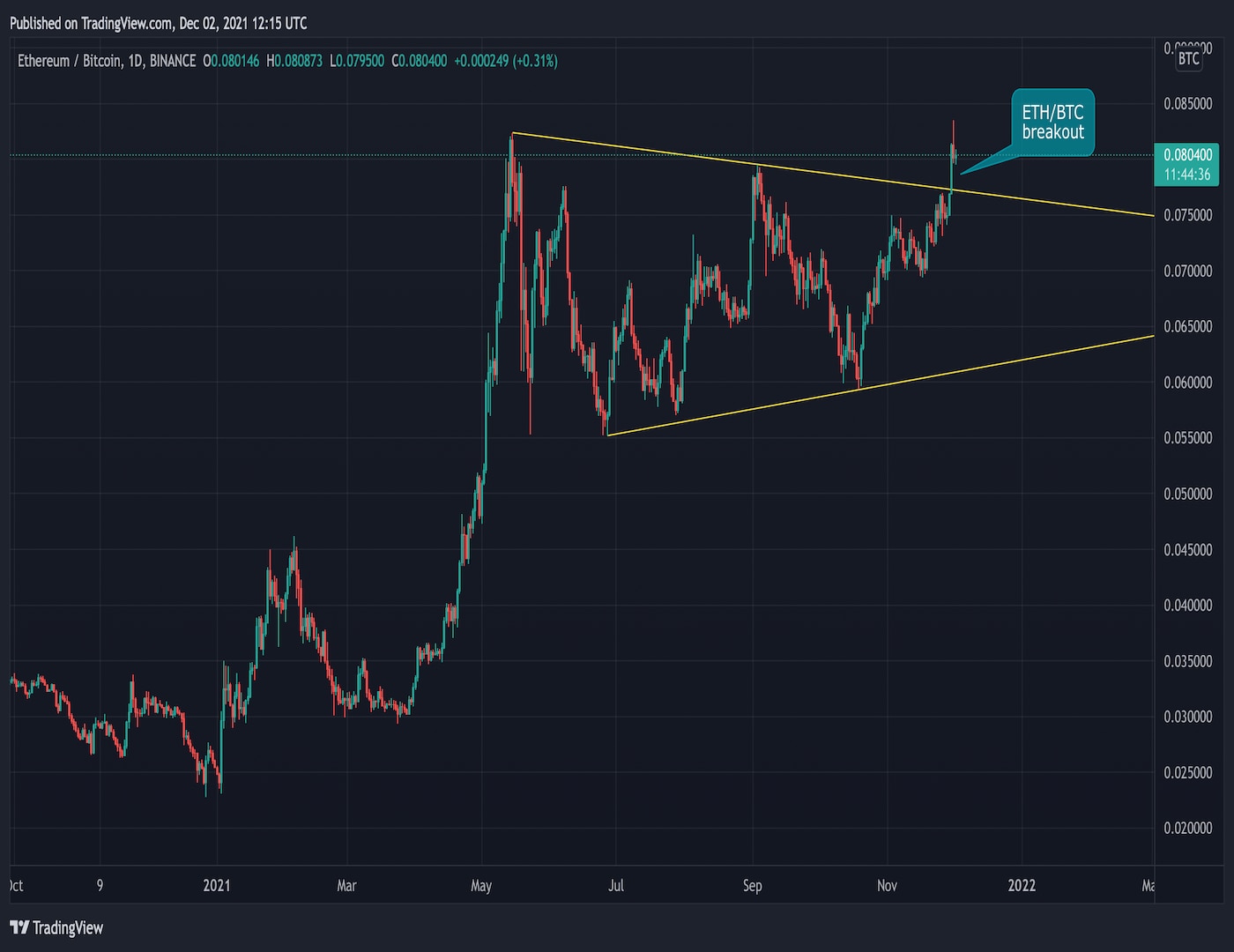 “Right now, ETH is looking poised to make new highs vs. BTC – something we haven’t seen since the ICO (initial coin offering) mania of 2017,” David Hoffman, founder of the Bankless newsletter, noted. “One theme that we’ve seen throughout Ethereum’s history is that the ETH/BTC chart goes up in bull markets and down during bear markets.”

Hoffman added that the ratio’s potential break above 0.80 would bring another “wild period in crypto markets.” ETH/BTC is trading near the 0.80 mark on the Binance exchange.

“A bull run to $100,000 looks unlikely as there could be a major altcoin rally later this month,” MintingM, a Mumbai, India-based crypto asset management company, said.

Still, MintingM said bitcoin might surprise everyone if a major company or country accepts it as a means of payment or the U.S. Securities Exchange and Commission (SEC) approves a spot-based bitcoin exchange-traded fund.

According to historical data, bitcoin could rally to around $73,000 – about $29% above the current price of $56,400, should the macro situation improve and ether picks up a strong bid, lifting the entire market higher.

“The average return from Thanksgiving until year-end has been 29%, with a powerful 72% rally in 2020,” Jeff Dorman, chief investment officer at Arca, said in a blog post published Monday.