Then, the crypto market crash happened, and the price of DOT dropped to a low of $10.37, losing almost 80% of its value, from the all-time high. It is worth emphasizing the $10.00 level, which previously acted as a major resistance that drove the price to all-time highs, and is now acting as a strong support level for DOT. It never touched this level during the breakdown mid-year 2021, which signifies strong buying demand in this area.

DOT has since exhibited a resilient V-shaped recovery, which has almost erased and recovered the entire market crash to date, as it is trading currently at $41.35, which is just a few points below the all-time high levels. A bullish sentiment has indeed returned to the cryptocurrency market, led by Bitcoin (BTC), which is trading near all-time highs again, after also correcting sharply mid-year. DOT has been creating a tight consolidation over the past few days, just above $40.00 – it will only be a matter of time before it ascends to all-time highs again.

Recent Changes in the Polkadot Price

Polkadot (DOT) is an open-source blockchain technology that helps interoperability across different chains. DOT is Polkadot’s native token. It is used for governance, operations, bonding and staking. The Polkadot network allows for more flexibility, control and security for developers and users.

Their mission is to create an internet where personal identity and data are owned by the individual and not sold to corporations or any central authorities – a totally decentralized web where the users are in control, and not the large institutions of today. The Polkadot network empowers both the innovators and the users to build faster, cheaper and better solutions for society.

Polkadot is the chief project of Web3 Foundation, a Swiss foundation that funds the research and development of projects, with the mission of creating a more decentralized internet. The founders of Polkadot are Robert Habermeier, Dr. Gavin Wood and Peter Czaban. It is interesting to note that Dr. Wood is the co-founder of Ethereum.

Currently, Polkadot is the 8th-largest cryptocurrency in the market, with a market capitalization of $41B at the time of writing.

Forecasting the price of any financial security is usually a hit or miss business, because nobody can really predict the future. However, in trading and investing, you can definitely place a well-thought-out bet, based on favorable probabilities, as long as you understand and manage the risks, in the event that you are wrong.

In the case of DOT, predicting the year-end price could, first of all, be heavily influenced by the way the overall cryptocurrency market performs towards the end of the year. Big caps, like Bitcoin and Ethereum, had already rallied to near all-time high levels at the time of writing. Usually, what happens next is that capital flows from big to small market cap coins or Altcoins, such as Polkadot. We can expect that, after a rally in Bitcoin and Ethereum, the Altcoins will follow.

After looking at the overall market environment, the next logical approach would be to understand the intrinsic factors that could affect Polkadot in the near future. One such possible catalyst would be the launch of “Parachains”, which are new and improved, next-generation, layer-1 blockchains. These Parachains will be auctioned in batches, beginning on November 11 for the first batch, and December 23 for the second batch. If this program is successful, it could be a strong catalyst for a price rally in DOT at the end of the year.

I believe the year-end price prediction of $50 is a conservative one, and I think it could even be achieved even before the year ends.

We may be looking too far ahead, but the long-term future for Polkadot and cryptocurrencies in general, is definitely bright. Here are the reasons why I believe Polkadot (DOT) could reach the price of $200-300 in three to four years. 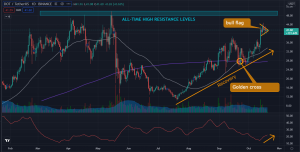 Here are some key observations of the DOT/USD daily timeframe chart:

DOT Trade Idea: Buy the Breakout of the Bull Flag

DOT could reach all-time high levels again in the next few days to weeks, if the flag pattern is successful. This is a quick momentum trade, so it is important to be able to get in and out of the trade as soon as the price goes north or south either way.