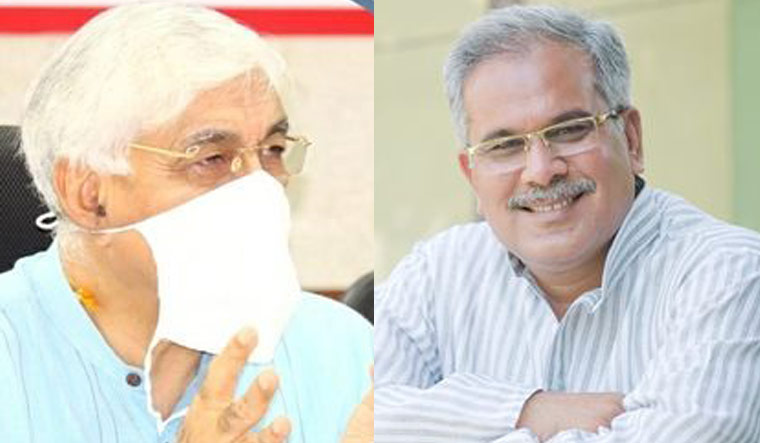 
These days, Chhattisgarh Health Minister T.S. Singh Deo is hardly able to visit New Delhi, where he has relatives, without creating political ripples.

He has always been a regular visitor to the national capital, but ever since he has had a public fallout with Chief Minister Bhupesh Baghel over sharing of power just over a month ago, every visit of his elicits a lot of interest and intense speculations.

Singh Deo returned to Raipur on Friday evening after spending five days, in what was his latest visit to New Delhi. He had reached the national capital on September 20 – the day the new chief minister of Congress government in Punjab took oath – giving way to another round of speculations.

Singh Deo had replied to media queries on his arrival saying, “All is well (in Chhattisgarh) and the issues that were there, have been resolved.” He had also clarified that it was a completely personal visit (for his sister’s birthday). According to sources, Singh Deo did not meet any senior Congress leader during the visit.

Back in Raipur, talking exclusively to THE WEEK, CM Baghel did not seem totally comfortable about the situation. “If things happen somewhere, it does not mean it will happen elsewhere too. But again, it is not that if something has happened somewhere, it won’t happen elsewhere,” Baghel said somewhat cryptically to a question on the political tumult. He also reiterated that he will leave the CM post the day the party high command directs him to. Baghel also said that his personal relations with Singh Deo continued to be good and that they met and conversed regularly.

On Thursday, government spokesman and Baghel loyalist minister Ravindra Choubey announced that the chief minister will visit New Delhi in first week of October to finalise the proposed visit of Rahul Gandhi to the state.

This announcement also seemed to hint that all was well for Baghel at the helm of affairs. Baghel had talked about the visit of Gandhi after a much-hyped meeting with him in New Delhi on August 28, when it was speculated that the CM might be asked to quit in favour of Singh Deo.

But, on the ground, things look different. Another round of open spat between supporters of Baghel and Singh Deo came to the fore in Bilaspur. An FIR was lodged against Pankaj Singh, a close aide of the health minister, after he allegedly engaged in scuffle with employees of CIMS, Bilaspur, earlier this week. A group of Congress members led by Singh Deo supporter local MLA Shailesh Pandey, demonstrated before the police station over the FIR and alleged that the action had come because they were supporters of Singh Deo.

The matter took a turn for the worse on Thursday after the Bilaspur district Congress committee held a meeting and passed a resolution to expel Pandey from the party for six years for anti-party statements.

State Congress chief Mohan Markam, who has steadfastly refused to take sides in the ongoing internal tussle, said on Friday that when the issue comes before him, proper action will be taken. “Someone can’t be directly hanged; we will send notices, make a probe committee if needed and decide upon the necessary action,” he told mediapersons.

So, it is clear that while the top leaders are trying to present a picture of calm, the situation is uneasy in the state over the issue of power sharing tussle and the discomfort has only grown after the developments in Punjab.

Singh Deo seemed to have put his foot down over the much-talked about 2.5 years power sharing formula last month after allegedly being ‘humiliated’ by Baghel supporters, including an accusation of a murder attempt by a party MLA.

By August end, it looked like curtains for Baghel when he was called for the second time to New Delhi within three days even as Singh Deo was camping there for two weeks. But, over 50 of the 70 Congress MLAs in the state apart from other Congress leaders, made a beeline to the capital behind Baghel and stayed put at the All India Congress Committee (AICC) office until the CM came back from the meeting with Rahul Gandhi and indicated that all was well, at least for the present.

It was said that the apparent support of the majority of MLAs saved the day for Baghel. But the chapter certainly did not appear to be closed. After returning to Raipur after a long stay in Delhi a day later, Singh Deo had said that he had spoken his heart out to the high command and ‘the decision was reserved with them’.

The health minister has not made any other comment on the issue after that, though he has made three more ‘personal visits’ to Delhi in the duration. But he certainly seems to be awaiting some kind of a ‘final decision’ from New Delhi.

Political commentator Rasheed Kidwai feels that discomfort both for Baghel and Singh Deo was natural as the Punjab developments indicated two things clearly. “First, it showed that if the high command wants to manifest its power and ceases to be neutral, then not many MLAs will stand by the chief minister irrespective of their earlier stand. Second, it gave out a clear signal that if two contenders in a tussle fail to resolve their issues, a third unexpected person might benefit from the situation. So, this is a point to ponder for both Baghel and Singh Deo,” he said.

He also added that the Congress bosses never like the ‘silence of graveyard’ in the party, meaning they want the party to be vibrant and thus dissenting voices are allowed. “However, it is clear that there is a limit to everything and if that limit is crossed, then the high command has the final word,” Kidwai said.

Up 550% in 40 days! Sixth largest cryptocurrency poised for a longer bull run