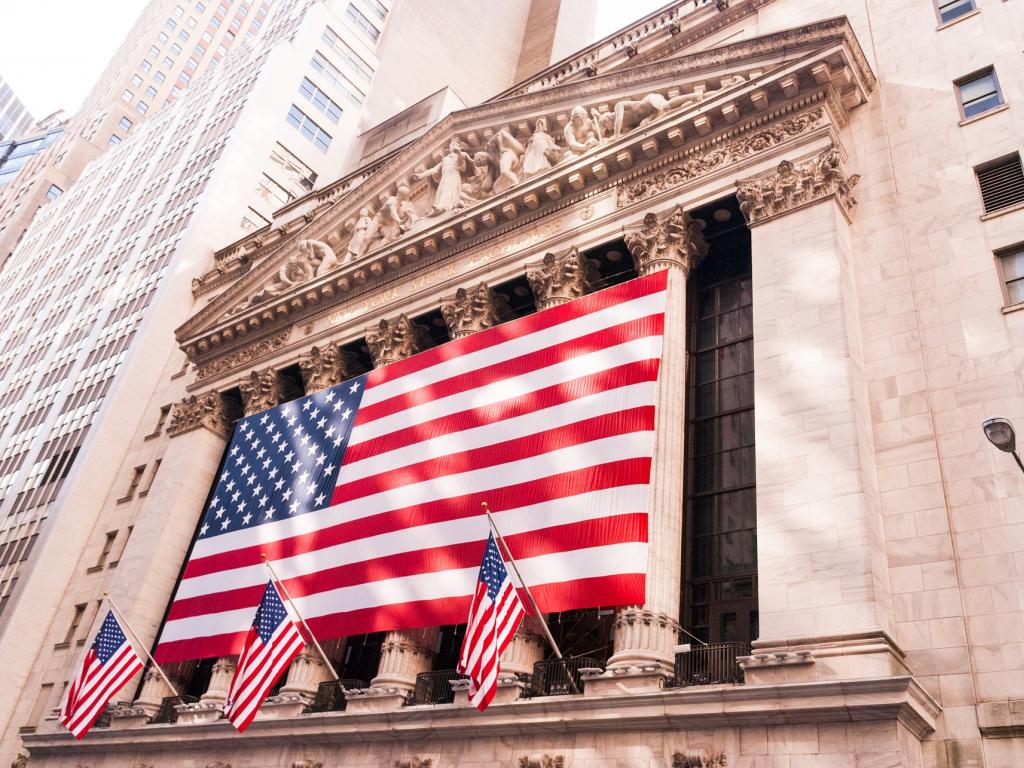 The orderly selloff we’ve been having just got a bit disorderly. The markets started the week feeling like it was a Manic Monday with stock futures sharply lower on extended concerns regarding China’s real estate sector.

Of particular interest is Hong Kong-listed Chinese developer Evergrande Group and whether Beijing will let the debt-laden firm fail. A default could mean potentially billions in losses for shareholders and bondholders around the world.

This is on top of continued concerns that there could be ripple effects for the rest of the global economy as the Chinese government continues to tap down on its real estate and other industries that are considered in need of reining in.

Meanwhile, lawmakers in Washington continued debating an increase to the government’s borrowing limits. The House is set to vote this week on the debt ceiling and a stopgap spending measure to keep the government operating past the end of the fiscal year, which ends on September 30.

The upshot was a clear risk-off tone to the market. Following sell-offs on Friday and this morning, the question now is will this become a prolonged number of sell-off days or will this signal a buying opportunity.

Stuck In The September Doldrums

Monday morning’s sell-off is a continuation to last week’s action, which ended on a down note as the major indices hit a roadblock following a rebound on Thursday. Selling was pretty widespread across the S&P 500 Index (SPX), with only Health Care and Consumer Staples even coming close to the unchanged mark. Those two sectors tend to be more defensive in nature.

Overall, September continues to live up to its bad reputation as historically the weakest month of the year. But that doesn’t mean it can’t rebound. One thing we continued to see even during Friday’s worst moments was some “buying the dip” down near the 50-day moving average for the SPX. That level was near 4436 going into the end of last week and the SPX closed just below it at 4432.76. This morning the E-mini S&P 500 Index futures (/ES) are trading lower which could mean the SPX could start the week below the 50-day MA. The SPX has generally bounced every time it’s fallen to the 50-day MA so far this year. Hopefully, this means after two days of selloffs, there’s a chance we’ll rebuild from there.

If the 50-day MA gets taken out in a major way (meaning several closes in a row below it), then it might be harder to find enthusiastic buyers and perhaps there could be a test of the 100-day MA down near 4326. That kind of move, interestingly enough, would get the SPX into basically a 5% downturn from its all-time high of 4545 set in early September. Many analysts have noted how long it’s been since the market had a 5% move lower. There hasn’t been one this year, which is kind of weird considering it’s something experienced nearly every year at some point.

For the market to avoid that, it would probably help if it got some support from the mega-caps, but that didn’t happen late last week. The recent stretch has been a very tough one for the “trillion-dollar-plus” club, with Apple (NASDAQ:AAPL) taking a hit almost every day lately despite last week’s Apple Event where the company introduced new products. Shares are down about 7% from the all-time high. When the mega-caps are suffering, the SPX tends to get hurt, too, because the Apples and Microsofts (NASDAQ:MSFT) of the world have a massive weighting in the index. AAPL has been under pressure ever since a judge’s recent ruling appeared to threaten the company’s revenue from apps.

It seems like we just got through the Fed’s Jackson Hole symposium and now there’s another Fed meeting straight ahead. The Fed gathers tomorrow, and it was interesting to see the benchmark 10-year yield climb toward recent highs Friday, although it has pulled back a bit today. The 10-year yield peaked Friday at a two-month high up near 1.39%. You have to go back to late June to find a time when the yield is regularly traded higher.

Could this be a sign of some traders building in a little caution just in case Fed Chair Jerome Powell and company say anything hawkish this Wednesday in their statement and news conference? That might be the easy answer, though it’s hard to say for sure. Before the meeting approached, a lot of analysts were rolling back their expectations for a taper timing, with some now saying the November Fed meeting is a more likely time for that announcement. The Fed has made clear that it plans to “taper” its $120 billion a month in bond buying soon, but the market lacks clarity on when. It may be hard to see much direction until that riddle is solved.

The Fed might have gotten a bit more breathing room thanks in part to last week’s relatively tame reading from the government on August consumer prices. Friday’s soft read on sentiment from the University of Michigan (up just barely from the August low) also provided evidence that people might be in a cautious mode. If consumers feel cautious, that could suggest anything from a weakening jobs market (August jobs growth was much lower than expected due in part to the Delta variant) to worries about inflation.

For the Fed, consumer caution could mean pressure to stay dovish and not make borrowing conditions any tougher. Of course, the European Central Bank (ECB) recently said it was going to trim its bond purchases, and central banks often act in concert, so to speak. The main thing for investors to keep in mind going into the Fed meeting is that trading often slows as the Fed meets, so perhaps expect less exciting markets over the next two days.

While trading might be slow for a day or two, volatility could be higher over the next month if you pay attention to the Cboe Volatility Index (VIX). While it moved above the long-term average of 20 on Friday, it went higher than 26 this morning. This move might raise some eyebrows and be a warning sign of more stock market trouble ahead.

Some of the weakest performers on Friday included Materials companies in the mining and metals sub-sectors (see more below). Even before Monday’s open, U.S. Steel (NYSE:X) saw shares melt down 7% or more during Friday’s session. This pain for investors in the steel giant came despite the company delivering what looked like strong guidance earlier in the week and talking about possibilities of a record Q3.

Some of the pressure, research firm Briefing.com said, could reflect construction plans for new capacity that might weigh on prices, along with worries about the progress of the infrastructure bill in Congress. Failure to pass it would probably hurt the entire Materials sector, which might explain wider pressure in Materials on Friday. Nucor (NYSE:NUE), Freeport-McMoRan (NYSE:FCX), and Cleveland-Cliffs (NYSE:CLF) were other Materials stocks taking a dive late last week. 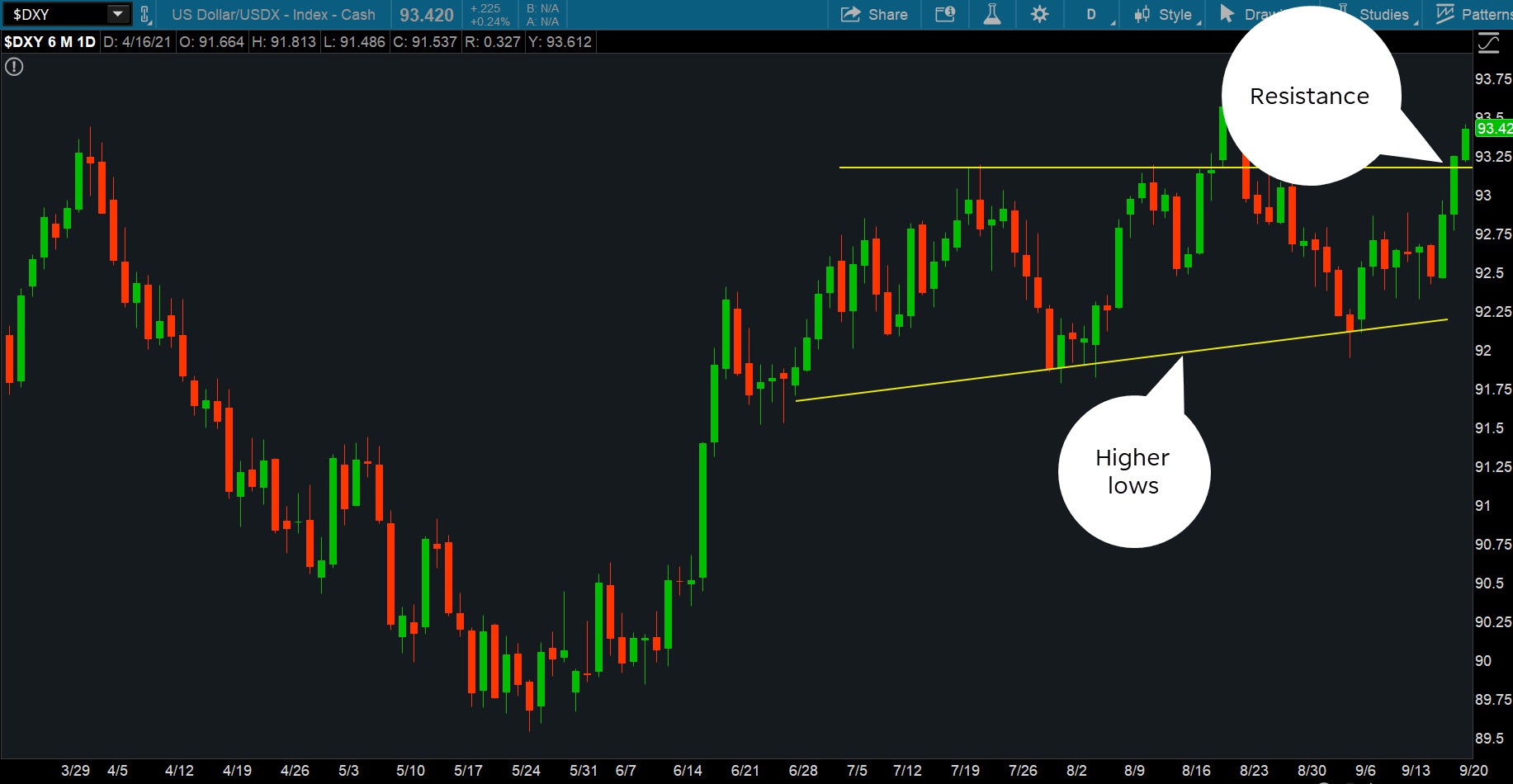 CHART OF THE DAY: DOLLAR’S MOVE. After a series of higher lows since late June, the U.S. Dollar Index ($DXY—candlestick) looks like it could be trying to break above its resistance level (upper yellow line). On Friday it closed just above that level and has moved sharply higher this morning. Data source: ICE Data Services. Chart source: The thinkorswim® platform. For illustrative purposes only. Past performance does not guarantee future results.

A Taxing Question: If you’ve watched the financial news media lately, you probably know about the capital gains tax debate in Washington. House Democrats propose a 25% tax on dividends and capital gains, while the White House wants to slap a 39.6% tax on those for the highest earners. It’s unclear which (if either) proposal will be in the ultimate legislation, but either could mean a significantly higher tax bill for wealthy investors, who currently pay 20% on both capital gains and dividends.

Earlier this year when the tax talk surfaced, we discussed its possible implications on the markets. Investors mostly seemed to consider that issue “out of sight, out of mind” over the summer, but now it’s back on speed dial. As an investor, these things are pretty much outside of your hands (though you could write to your congressperson if you really feel concerned). Analysts say some of the recent pressure on stocks could reflect investors taking profit so they can pay the current tax, not a higher one down the road (though some proposals would tax gains retroactively back to April 2021).

The important thing is to keep your head and not overreact by selling or buying without doing your homework. First of all, make sure you’re even going to be affected by these proposed higher taxes. Remember, Democrats have said that any higher taxes won’t affect people making less than $400,000 a year. Second, understand that capital gains and dividend taxes are moving targets that go up and down over the years. Higher rates could conceivably hurt the market and some investors, or maybe not. The maximum capital gains tax rate was 28% between 1986 and 1997, and it corresponded with a huge market rally that lasted most of those years—the SPX quadrupled over that time span.

Midas Metals Losing The Midas Touch? If you’ve been hedging your portfolio with gold and silver exposure via mining stocks, then last Thursday might have been a huge upset. Barrick Gold Corp (NYSE:GOLD) and Newmont Mining Corp (NYSE:NEM) were down 4.39% and 3.95% respectively. While these two took a good beating, many among the “smaller” billionaire market cappers got absolutely clobbered, like Coeur Mining (NYSE:CDE) and Hecla Mining (NYSE:HL), down 13.5% and 9% respectively.

So, what’s with the Thursday beat-down? Considering the so-called “safe haven” status of precious metals and their miners, the industry tends to get a bit jumpy on economic data, and that’s likely what happened. While analysts expected an August Retail sales report of -0.8%, the +0.7% surprise was enough to make optimism jump, and precious metals (and their miners) plummet. Can we say there’s not enough “fear” in the market to seek safety? If so, that can be a good or bad thing. Plus, the anticipation of a stronger dollar can be enough to keep the gold and silver industry down. But don’t discount King Midas just yet. If anything, he’s known for exhibiting near-infinite patience. Well, maybe not infinite, but enough to have lasted a few millennia.

It’s A Roll Of The Dice. That old expression about dice may be true for casino patrons, but now for casino owners and shareholders with exposure to China as well.

Already smarting from the pandemic that kept global gamblers away from the Blackjack tables, now comes the wide-ranging crackdown in China, this time with gaming-mecca Macau in its crosshairs. Last week Chinese officials said they would change casino regulations to tighten restrictions on operators, as well as appoint government representatives to supervise companies.

MGM Resorts International (NYSE:MGM), maybe not so much. Most of its revenue still comes from its US-based gambling operations. Penn National Gaming (NASDAQ:PENN) has no exposure to Macau, ditto for casino operator Caesars (NASDAQ:CZR).

This year has seen China crack down on industries including education, ride-hailing services, gaming, and more. Analysts are expecting more to come.

Image by David Vives from Pixabay