Bitcoin price buoyed again by an unusual tweet from Elon Musk, lifting the bellwether cryptocurrency beyond the highs established by the El Salvador legal tender news. Ethereum price inches toward the London hard fork with passive price action and weak correlation with the Bitcoin advance. XRP price remains locked in a tight trading range with explicit support at $0.76-$0.78.

With the tool of Twitter, Elon Musk triggered a 10% spike in Bitcoin price, indicating that if the renewal energy used for the Bitcoin network exceeded 50%, he would consider allowing bitcoin transactions again. It was the necessary catalyst to release BTC from a long-standing symmetrical triangle originating back in mid-May.

The resistance will prove formidable, and the concerning lack of volume underpinning the bounce from the bullish hammer candlestick pattern on June 8 may portend a few stumbles. Moreover, the upcoming death cross, when the 50-day SMA crosses below the 200-day SMA, could provide further downside pressure. 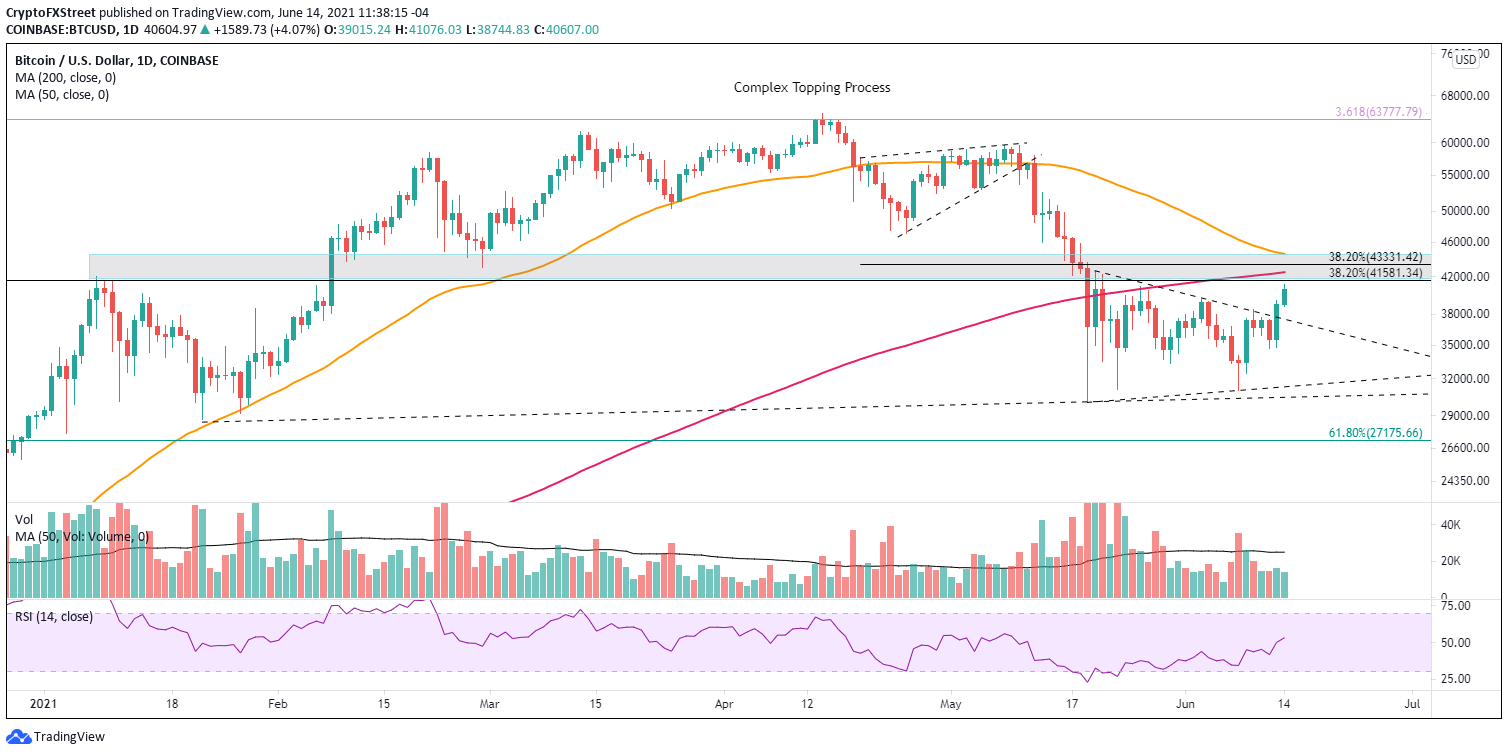 First and foremost, Bitcoin price needs to a daily close above the 50-day SMA at $44,618 to firmly place BTC on the path to chase the all-time high of $64,899. It would represent a gain of just over 10% from the current price and likely one of the most challenging 10% gains for the flagship cryptocurrency.

On the whole, Bitcoin’s social volume data indicated a strong crowd reaction to the El Salvador news, which many hyped as the turning point for Bitcoin price fortunes moving forward. Yet, the excitement did not last long, with social volume dropping sharply into June 12, taking it to the lowest levels since April. 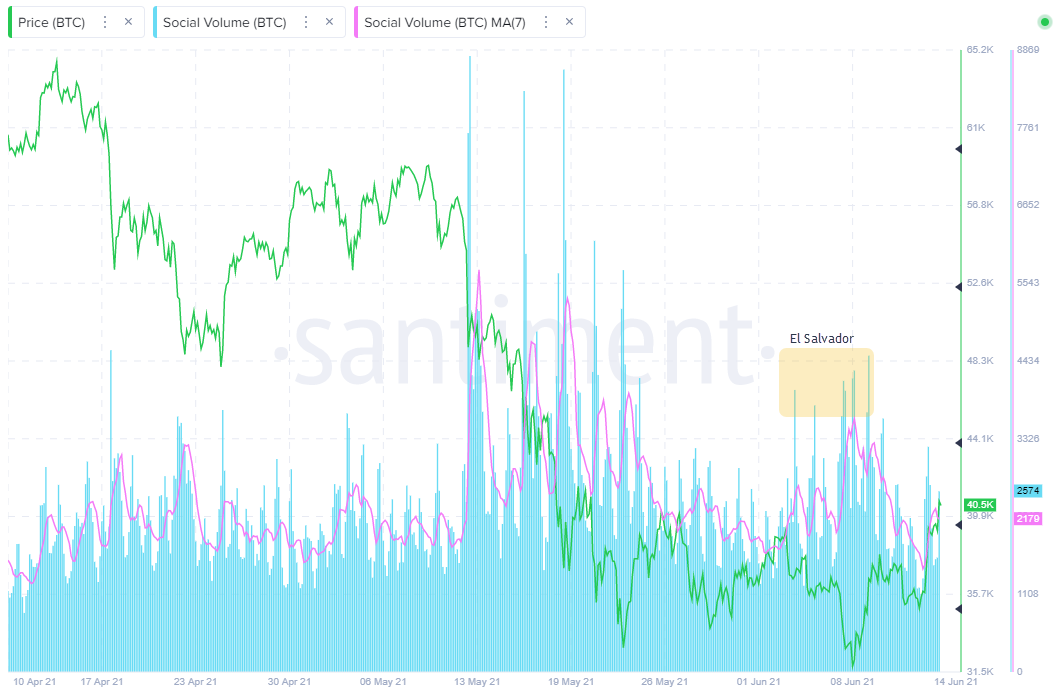 Musk’s tweet was matched by renewed social volume but well below the levels reached on the El Salvador news. To be sure, sentiment is a secondary indicator; however, the Bitcoin price battle with the upcoming resistance would be well-served by a new intensity in social volume.

Ethereum price shifts from bear pennant to a symmetrical triangle

Until yesterday, Ethereum price had been forming a bear pennant formation on the charts. Still, it has now moved into its fourth week of duration, transitioning it to a symmetrical triangle. More specifically, pennants are shorter duration patterns and should not last more than three weeks.

The London hard fork update is only a couple of weeks away. It is projected that the hard fork will be successful, making Ethereum more attractive as a store of value, thereby permitting the digital asset to expand its target market.

Nevertheless, the current governing technical pattern and the pronounced underperformance versus Bitcoin as measured by the correlation coefficient implies that the hard fork may experience some glitches or setbacks. Moreover, the symmetrical triangle still presents the possibility of a 40% decline if the pattern resolves to the downside, placing Ethereum price near the 40-week SMA at $1,468 and the 2018 high of $1,419. 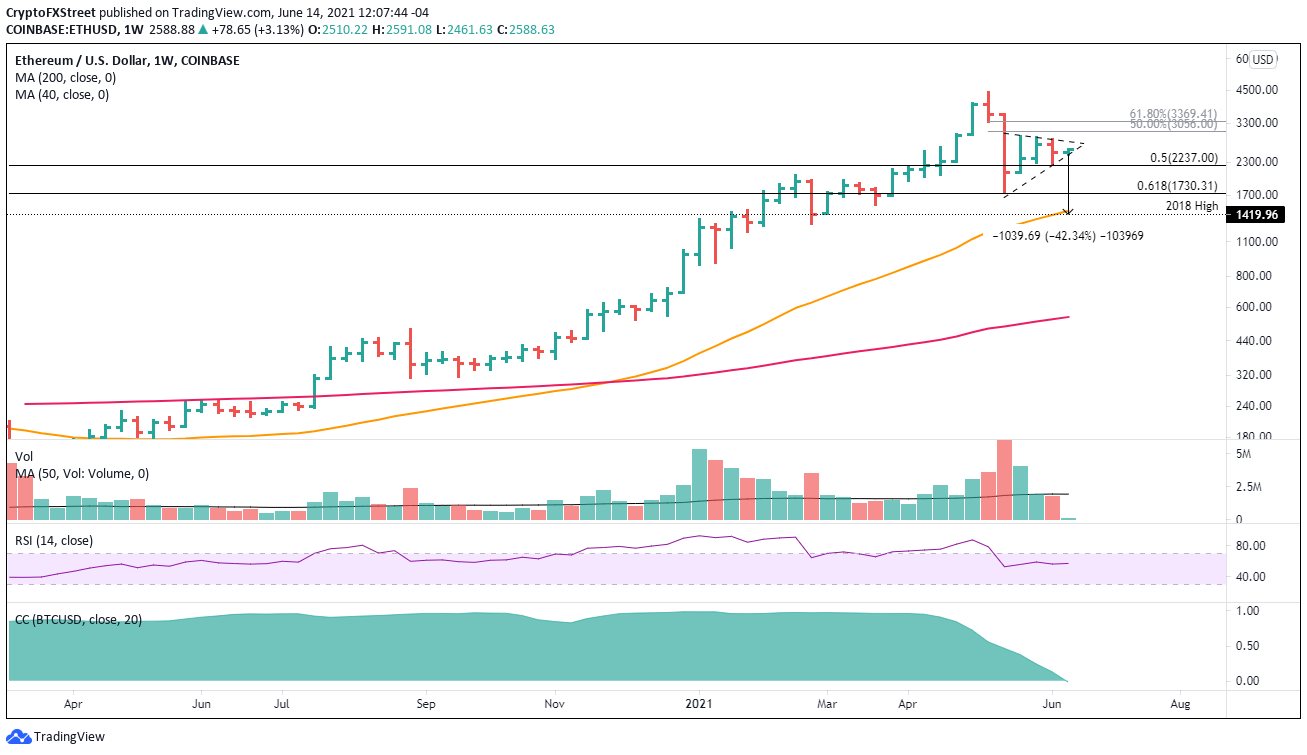 Ethereum price is nearing the apex of the symmetrical triangle, suggesting that a breakout or breakdown is coming soon. Still, due to the closeness of ETH to the apex, the resolution may lack impulsiveness.

If the rally takes on impulsive price action, Ethereum price could reach the measured move target of the symmetrical triangle at $3,970.

XRP price range keeps investors in a state of suspense

XRP price had been marching lower after triggering the bear flag on June 3, without the impulsiveness often characteristic of such patterns. Yesterday’s 10% rally in Bitcoin did offer a springboard for Ripple, carrying it to the 50 twelve-hour SMA.

On the upside, the price range between the psychologically important $1 and the 38.2% Fibonacci retracement of the April-May correction at $1.145 has contained the rebounds since May 23, thus forming a convenient and actionable trading range for keen Ripple swing traders.

The measured move of the bear flag pattern, determined by the percentage length of the flagpole, is approximately 55%, establishing $0.422 as the target. Thus, at $0.422, XRP price will have declined almost 80% from the April high of $1.96, thereby canceling the ambitious forecasts of a test of the all-time high of $3.30 in 2021.

A daily close below $0.760 will dictate a rethink of the trading range outlook favoring a more bearish outlook that includes at least a sweep of the May 23 low of $0.652. 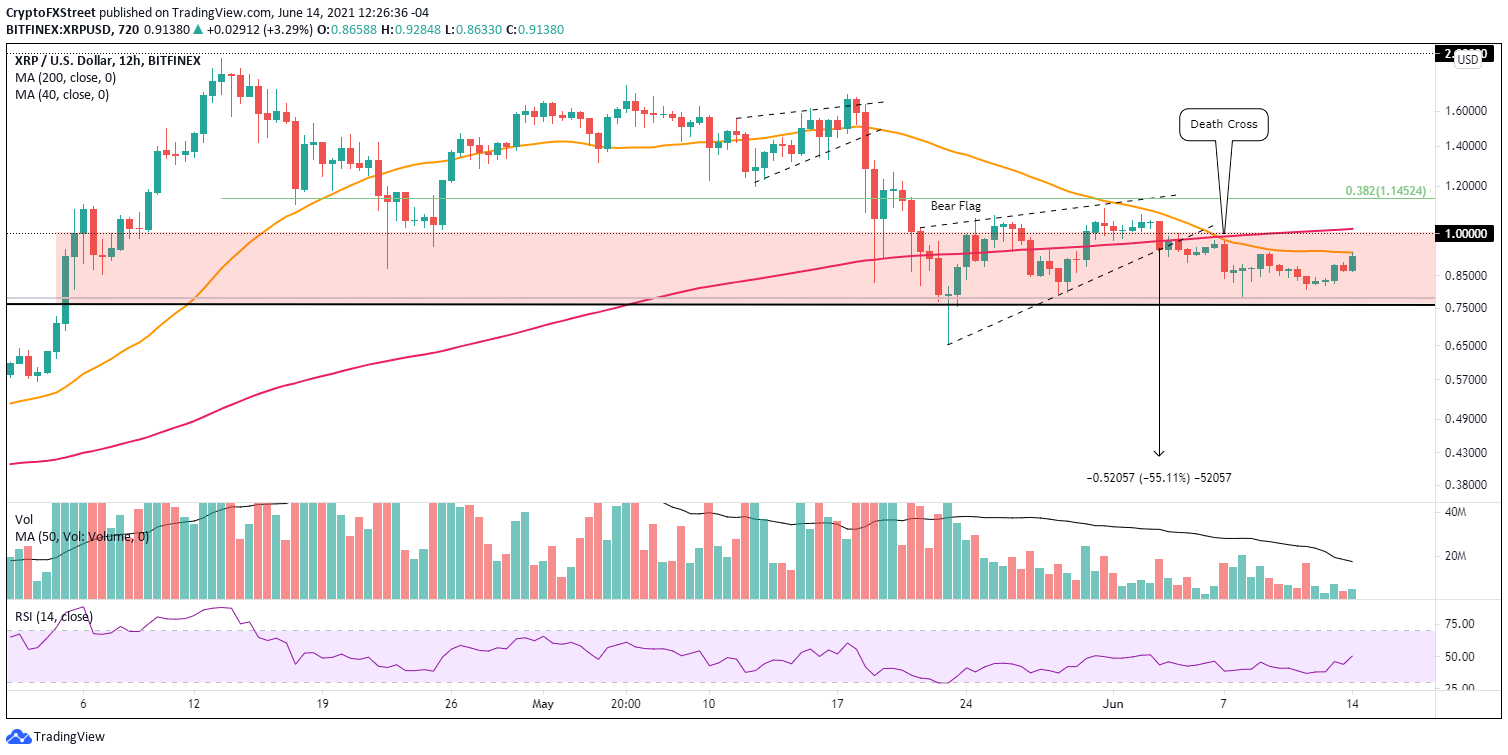 On the upside, XRP price would need to begin with a daily close above $1 and the 200 twelve-hour SMA at $1.018 before engaging a bullish outlook. A bullish view would be confirmed by a daily close above the 38.2% retracement at $1.145. It would be a 25% gain from the current price, but investors should be patient without entries near outstanding support.