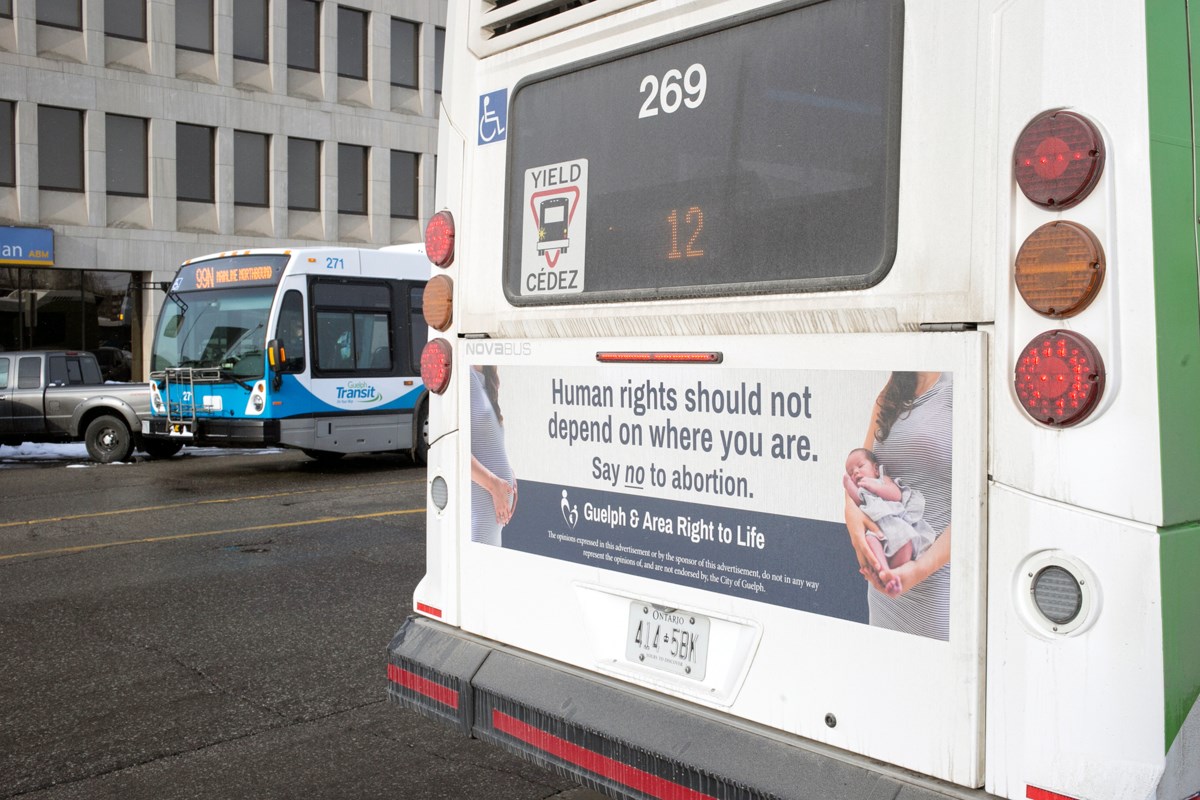 Three national organizations have been granted “friends of the court” status for an upcoming court challenge of the city’s decision to pull three anti-abortion advertisements from buses in 2019 and 2020.

“We think this is an important case because, I think, Canadians have the right to be protected from false advertising, which is really what this case revolves around and whether cities have the right to refuse such advertising or whether they’d be compelled to subject the public to false and demeaning advertising,” said Joyce Arthur, executive director of the Vancouver-based Abortion Rights Coalition of Canada (ARCC).

“If the city lost this case, then it could have ripple effects across Canada, with other cities being forced to accept false advertising as well.”

Guelph and Area Right to Life requested judicial review of the ads’ removal, claiming the city’s decision infringes on its freedom of expression protected by the Charter of Rights and Freedoms, which is set to be heard by a panel of divisional court judges the week of June 14.

A hearing held on Wednesday confirmed that the Christian Heritage Party of Canada (CHPC), Association for Reformed Political Action of Canada (ARPAC) and ARCC would be allowed to participate.

GuelphToday previously spoke with representatives from the other two organizations regarding the case but was unable to connect with ARCC at the time.

While Guelph and Area Right to Life, CHPC and ARPAC maintain the city’s decision to remove the ads infringes on expression of free speech, there are other Charter rights at issue in the case, Arthur argues.

“The effect that these ads have, anti-choice ads in general and their ads in particular … are impacting charter rights of women and other members of the public too. We’re talking about women’s right to conscience and religion, their right to life and liberty and security, the right to equality and to be free from discrimination,” she said.

“These ads have the effect of undermining those rights.”

The first ad was pulled in late 2019 following a public complaint and a ruling from Ad Standards which said the ad was misleading, explained Tara Sprigg, the city’s general manager of corporate communications, at the time, noting the city’s advertising policy is largely based on Ad Standard’s criteria for acceptance.

The ad showed a pregnant woman holding her stomach on one side and a woman in the same dress holding a baby on the other with the caption, “Human rights should not depend on where you are. Say no to abortion.”

The council looked to the Criminal Code of Canada to assess the meaning of human, ruling it defines a child as human in a legal sense only after live birth. As such, the advertisement in question was found to be misleading.

Two additional ads were taken down in March of 2020.

One featured the image of a pregnant woman on the left and a woman holding a small baby on the right, with the caption, “Human rights should not depend on where you are. Say no to abortion.”

The other included an image of a healthy baby in utero with the caption, “What about her choice? Say no to abortion.”

In its statement of claim, Guelph and Area Right for Life said those ads were removed based on a prior Ad Standards ruling, which called them both misleading and the first one also demeaning to women.

ARPAC is asking the court to rule on the role of non-government agencies such as Ad Standards in providing advice related to the appropriateness of advertisements, previously explained Tabitha Ewert, the group’s legal counsel.

However, the ARCC intends to defend the practice.

“It’s a very well-established, widely used guideline. Sure, it’s a voluntary code, but it’s been around for over 50 years. For over 50 years advertisers have been regulating themselves using this code,” Arthur said. “They want to compel the city to accept these paid ads against the city’s statutory objectives of trying to create a safe and welcoming environment for people.”